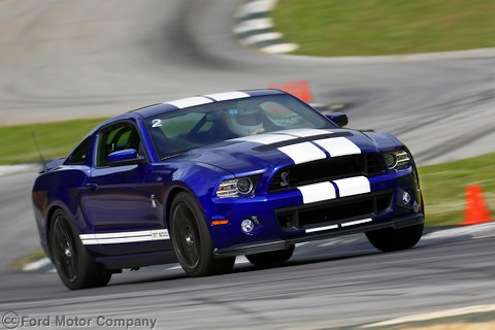 The SVT Team developed a 200 mph+ 2013 Ford Shelby GT500 supercar and they tell us how they did it.
Advertisement

The 2013 Ford Shelby GT500 is a rare and unique American-made car that can travel at 200 mph speeds without the driver even feeling like it’s going that fast. The SVT team of engineers have given us an explanation of what it took to pull that off in the most powerful Mustang Ford has ever produced. It takes a lot more than just stuffing a 662 horsepower V8 engine into a Mustang body. SVT engineers had to improve two key areas in order to create a 200 mph ponycar that would stay on the track at those speeds without blowing up.

The two components that they addressed were the driveline and front end aerodynamic improvements. John Pfieffer, who is the Senior Engineer with SVT Vehicle Engineering, explains that the first key component they had to address was the driveline. And within the driveline, there are four parts that need to be working perfectly because of the incredible speeds that it spins while going 200 mph.

The clutch diameter was increased to 250 ml and a new high-temperature material was used to handle the ultra-high heat. The next area was the shift linkage that received revised ratios, and new bushings that help the driver with increased feel. The driver needs to feel connected to the car and the road and the 2013 GT500 clutch and shifter are two high-customer use parts. The clutch pedal was also improved with a highly tuned spring and master cylinder with the optimal geometry and shape.

A one-piece carbon fiber ultra-light driveshaft was engineered to handle the extreme speeds and smoothness needed for a uniform transit of power. The new carbon fiber driveshaft also lowers overall vehicle weight and inertia weight when those 662 horses and incredible torque kick in.

Front-end aerodynamics needed to be addressed

The new front end on the 2013 Shelby GT500 got some major improvements to improve the drag and the balance of the vehicle at 200 mph speeds. The aerodynamic improvements reduce the energy it takes to push the wind out of the way. It also helps the class-leading fuel economy of the GT500 that achieves 15 city/ 24 highway / 18 combined mph. This helped the supercar avoid any gas-guzzler tax. Aerodynamic enhancements also reduce lift and improve downforce on the vehicle giving extra stability at super high speeds.

Heat is the biggest enemy of a high-performance engine and key components within that system. The grille was redesigned to handle the extra air being pushed into the heat exchangers and also the handling of the air leaving in the most efficient manner. The high-flowing air goes through the heat exchangers, radiator, inter-cooler, oil cooler and transmission cooler. The new grille enables the airflow through the system and gets heat out of the engine compartment.

Also new for 2013 is an optional Performance Package with electronically adjustable dampers with a Normal and a Sport mode depending on if the driver needs street or track performance. A Torsen limited-slip differential is featured in this package when optimal traction on the track is needed.

A Track Package can be added for all-out racetrack performance. The optional package comes with an external engine oil cooler, rear differential cooler and transmission cooler for increased fluid and component life. The extreme temperatures are reduced under those 200+ mph speeds.

John Pfieffer was surprised when he first got behind the wheel of the newly designed GT500. He said, “The most surprising thing when I first drove the vehicle was how fast it was without realizing how fast we were really going. The perception of speed is amazing!”

The 2013 Ford Shelby GT500 is a car that would surprise anyone, even the engineer responsible for its development with its speed and incredible performance.