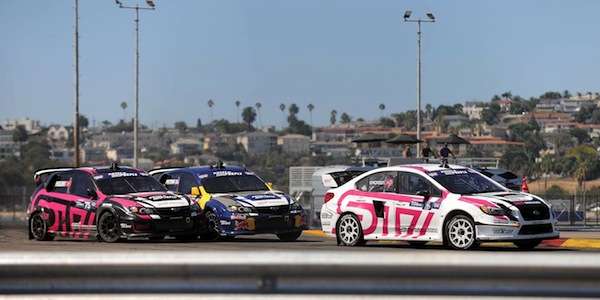 The Subaru WRX STIs fought hard at the double-header GRC race in LA this weekend. How did they do at the STI-sponsored event?
Advertisement

It was a better weekend for Subaru Rally team USA and the 2015 Subaru WRX STIs in LA for the Red Bull Global Rallycross race. The team brought four Subaru WRX STIs in their new liveries and a renewed effort as Subaru Tecnica International sponsored the double header event at the Port of Los Angeles. It was Bucky Lasek who qualified with the fastest time of any of the Subarus and secured the 3rd fastest time overall on day one.

No drivers advanced directly to the Final, but in the Last Chance Qualifier (LCQ), SRT USA dominated with Sverre Isachsen, Travis Pastrana and Bucky Lasek finishing 1-2-3. The three Subaru WRX STIs advanced to the Final where anything can happen.

It was Sverre Isachsen in his #11 2015 Subaru WRX STI that came close in the Final and finished just 3 seconds behind Patrik Sandell who finished in third place and Isachsen and Subaru narrowly missed a podium spot. Travis Pastrana ran a good race in the #199 WRX STI and finished in 7th place in the Final. Lasek was a Did Not Start (DNS) in the Final due to mechanical issues that kept him out. It was Volkswagen who dominated the first day of the double header with Scott Speed finishing first and Tanner Foust second in the VW Beetles.

On Sunday, it was Travis Pastrana who was the only STI that made it to the Final out of the four cars. Isachsen, Higgins and Pastrana made to the LCQ, but Isachsen was hit from behind and spun out, and Higgins was having mechanical issues. Travis Pastrana ran a good race and finished fourth in the LCQ to advance to the Final.

Pastrana in the #199 Subaru WRX STI battled hard from the third row and finished 6th in the Final after qualifying 4th fastest earlier in the day. When asked about the race Travis said, “The team and my Subaru have been great this weekend. We had to fight from the back of the grid and there was so much carnage in front of us. It was good to go one better than yesterday and earn a 6th. I slowed due to dust in the chaotic first lap as everyone was bashing into each other in front of me. It was good fun to claw up through the field.”

It was Scott Speed winning the race followed by Brian Deegan and Tanner Foust in third. Ken Block had another tough day and finished in last place after getting hit and spinning out. Overall, it was a successful weekend for SRT USA and Subaru Tecnica International even though they didn’t make the podium. There are two rounds to go and the 2015 Subaru WRX STIs will be at GRC Barbados October 3-4. Stay tuned.