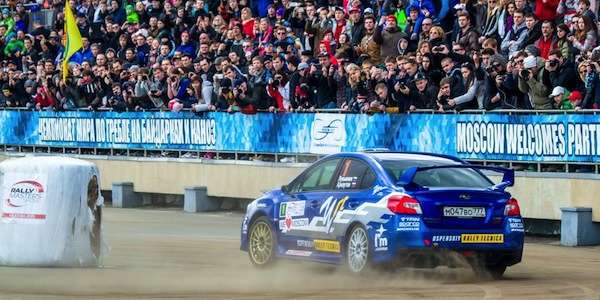 The 2015 Subaru WRX STI built by Uspensky Rally Tecnica wins the Rally Masters Show 2015. Who did UTR beat to win the rally?
Advertisement

Last weekend motorsports team Subaru and Uspensky Rally Tecnica (URT) joined together to participate in the Rally Masters Show 2015. The crew of Alex Lukyanyuk and Alex Arnautov run the new 2015 Subaru WRX STI group N prepared for the team Subaru Rally Tecnica specifically for the Russian Rally Championship 2015. The team started number one, won all the stages of the rally and came in first place showing the best time.

The Rally Masters Show is run on a relatively short circuit but it’s not the easiest of courses. A total of 44 crews started the race and only 13 were able to finish the race for various reasons. The race is run on the asphalt Olympic ride road which is 13.2 km in length and was built in honor of the legendary Moscow Olympics in 1980. This road is the platform for a variety of other events and shows.

A large spectator area for fans

There’s a very large spectator area where motorsports fans in Russia can watch a special stage up close. 2015 marked 35 years of the Rally Masters Show and was held for the fourth time at this venue. Each time, the race attracts more spectators and the event is free to the public.

The 2015 STI Rally car is powered by a 2.0-liter turbocharged boxer engine that pumps out 305 horsepower. What is even more significant is the 2.0-liter engine has a massive 450 lb. ft of torque to propel it in the...read more.

Subaru also brought the Subaru BRZ RCRS rally car with the team of Maxim black and Andrew Prokudin that made its debut in Rally 20-mi. The BRZ started with a good time but on a jump, the sports coupe ran off the course and into the grass. Spectators helped the crew get out, but the team lost valuable time and never recovered.

LG's New EV Battery Plant Is a Welcome News for Tesla
Tesla Giga Berlin's New Hurdle: It's Not Only the Gov't, but Now Tesla Itself
END_OF_DOCUMENT_TOKEN_TO_BE_REPLACED