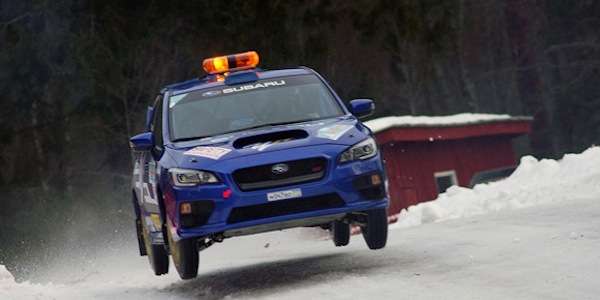 The Russian rally team led the race on the first day and never looked back. Uspensky and his co-driver Daniel Marina and crew noted the STI rally car handled terrific in the snow and had improved weight distribution and balance over last years 2014 STI.

The 2015 WRX STI is an all-new car for the team and it performed well in it’s second outing this season. Sergey commented after the race, “We had a good two days given that the car is really new and had the opportunity to actively get to know her, so to speak in a very active form.”

We aren’t sure what’s up with those skinny tires that Uspensky Rally Tecnica is running on the new 2015 STI rally car. SRT USA runs much wider tires and it seems they would have better traction in the snow. Like the Rally America Championship, Russian rally teams cannot run studded snow tires, and must run on tires designed for snow or ice. None of the legal tires for Peno 2015 excel at both, but the skinny tires URT runs in Russia are interesting.

Under the hood, URT outfitted the new STI Rally car with a 2.0-liter turbocharged boxer engine that pumps out 305 horsepower. What is even more significant is the 2.0-liter engine has a massive 450 lb. ft of torque to propel it in the Russia Rally Championship. It also comes with a specially tuned URT competition exhaust system.

Like Sno* Drift Rally in Michigan, Peno 2015 in the Russian Tver region, gets lots of snow to make the course extremely challenging for the drivers. Uspensky Rally Tecnica must have chosen the right tires for the 2015 Subaru WRX STI rally car because they came out of Pena 2015 with a big victory.