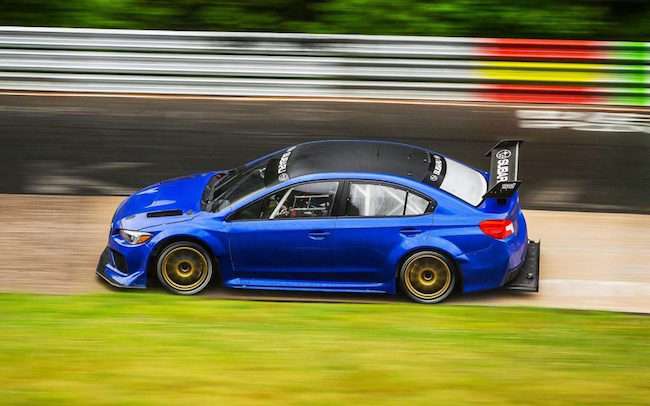 The Subaru WRX STI Type RA NBR Special will make its public debut at Goodwood’s Festival of Speed. When will it attempt the record run at Nurburgring?
Advertisement

Subaru will attempt the sedan speed record at the Nurburgring this summer, but first, the WRX STI Type RA NBR Special will take on Goodwood’s famous Hill Climb at the Festival of Speed. The RA (Record Attempt) badge has been applied to various Japan-spec Subaru performance models, and a production Subaru WRX STI Type RA is being sold in the U.S. for the first time next year.

But first, the track model will be on display at the Good Festival of Speed for fans to see before it heads off to Germany for the record attempt at the Nurburgring Nordschleife. It isn’t the first time Subaru has attempted to break world speed records. The original venture took place in 1989 when a Subaru Legacy competition version broke the FIA World Speed Endurance Record by running over 62,000 miles in 18 days and set a top speed record of 138 mph.

Subaru has a big presence at Goodwood

Mark Higgins, who recently drove a WRX STI down St Moritz’s Olympic Bobsled run, and set the lap record at the Isle of Mann TT in 2016, will be behind the wheel at Goodwood. Subaru will also be at the Moving Motor Show on Thursday, with some factory cars available for fans to drive up the Hill Climb.

Adrian Flux Subaru Racing, who races the Subaru Levorg sports tourers in the BTCC championship series, will be in attendance on Saturday and Sunday, July 1-2 with drivers Ash Sutton, Josh Price and James Cole for a meet and greet on the Subaru Stand at the Moving Motor Show.

Subaru says the race-prepared WRX STI Type RA NBR Special will attempt a Nurburgring speed record shortly after its runs up the Goodwood Hill Climb in the Time Attack Open class. The special STI will be driven by rally and stunt driver Mark Higgins. Stay tuned.

Panasonic Updates Profit Forecast, Noting How Much Tesla Batteries Help The Jump
2022 Porsche 911 GT3 Laps Nurburgring in 7:04 With Journalist Behind The Wheel
END_OF_DOCUMENT_TOKEN_TO_BE_REPLACED