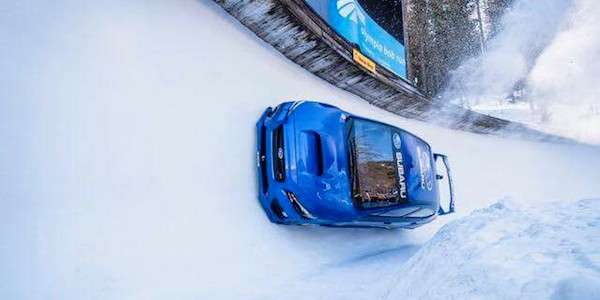 Watch a new behind the scenes video of the Subaru WRX STI’s insane bobsled run.
Advertisement

When Subaru released the Subaru WRX STI Bobsled run video a few days ago, they didn’t give any explanation of the event. Now they’ve released a new behind the scenes video of what actually took place and why they did it. Watch the insane video below.

Mark Higgins first got lessons from Jean Olsen, Olympic Gold Bobsled Medallist, on how to make the treck down the St. Moritz Celerina Bobsled Run. He get’s strapped into an official olympic bobsled and off they go. Higgins is the brake-man controlling the stopping power.

After the trial run in a sled, Higgins says, “It definitely helped thinking about how the car (Subaru WRX STI) is going to go down. I think it’s going to be a hell of a challenge. That’s what we’re here to do, it’s never been done before. It’s nice to try and do a first.”

Why did Subaru do it?

Two weeks later, it’s time for Higgins to take the 2017 Subaru WRX STI performance sedan down the 1722 meter long Olympic Bobsled run. Why did Subaru do it? Dominick Infante, Subaru of America, says it’s because they wanted to showcase the STI’s all-wheel-drive capabilities. Infante says, “You can use it in all kinds of situations.”

Subaru outfitted a stock WR Blue 2017 WRX STI with a full FIA roll-cage, spiked ice tires, and strengthening braces on the front bumper. With a few modifications to the bobsled run to make the STI fit, it’s off to the races. Everything else is pure insanity that follows.

Watch the Behind the Scenes: Subaru Bobsled Run video