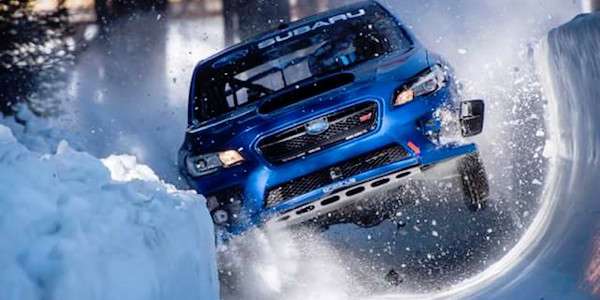 Mark Higgins loves to get in the Subaru WRX STI and make it go fast in unusual places, but never in a place like this. He shattered the car lap record at the Isle of Man TT course in a new Subaru WRX STI last year, but how about launching a stock 2017 STI down a bobsled run for one crazy ride. That’s what Subaru attempts to do with the rally-bred WRX STI. Who wins?

This took place at the St. Moritz Celerina Bobsled Run in the Swiss Alps at 6500 feet elevation. It’s the oldest bobsled run in the world, as well as the only natural-ice track in existence that hosts international races. It’s called the birthplace of bobsledding, and has staged events for two Olympic Winter Games, as well as 24 World Championships in its 125-year history.

Yes, it’s where Mark Higgins took a shiny new World Rally Blue 2017 Subaru WRX STI, and it’s the only time in the world a car has been driven on a bobsled run. Why did Subaru do it? Because they can. You just knew Prodrive had to be a part of this too. They helped outfit the WRX STI with winter ice tires and added extra cladding on the front bumper for protection.

What happens next is a bit unreal as Higgins launches the WR Blue sedan down the runway onto the bobsled run. The track is just wide enough for the high-performance Subaru, as he bounces off the sides like a bobsled team does running at full speed. Higgins gets bounced around like a pinball inside the car.

The rally-bred 2017 Subaru WRX STI gets vertical on the legendary “Horse-Shoe” corner and then comes down hard and he crashes into the side. But Higgins holds it together and doesn’t launch it over the side of the run, and finishes the 1722 meter long run with a few dents, but still in one piece. Only Subaru and Mark Higgins would attempt something like this.

LG's New EV Battery Plant Is a Welcome News for Tesla
Tesla Giga Berlin's New Hurdle: It's Not Only the Gov't, but Now Tesla Itself
END_OF_DOCUMENT_TOKEN_TO_BE_REPLACED