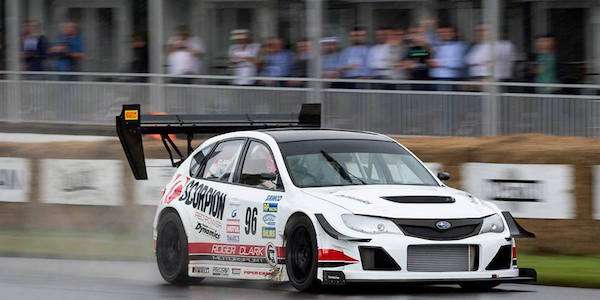 The Subaru WRX STI Gobstopper II has done it again at Goodwood Festival of Speed. How fast was the Subaru STI this year?
Advertisement

How fast was the WRX STI?

Olly Clark and the rest of the Roger Clark Motorsport team wins their second Goodwood Festival of Speed hill climb in a row. Olly won with an impressive 46.29 second run up the hill. Clark set the fastest qualifying run in wet conditions and was a favorite to win again. He didn’t disappoint Subaru STI fans.

The McLaren P1 LM, driven by Indy 500 winner Kenny Brack, was second with a time of 47.07 seconds. In third was Mike Skinner, who powered his Nascar Toyota Tundra truck up the hill in 50.44 seconds.

The WRX STI is impressive

Clark’s 780hp Subaru Gobstopper II WRX STI was built specifically to compete in the Time Attack Championship, where competitors have to complete a lap of a track as fast as possible, but are timed against the clock instead of racing directly against each other. This STI has impressive power.

PAGE 2: What’s under the hood?

The all-time course record belongs to Nick Heidfeld who was driving a McLaren Formula One car. In 1999 he crossed the finish line in an amazing 41.6 seconds. This year’s win goes to Olly Clark in the Subaru WRX STI Gobstopper II for the second year in-a-row.

This years winning run isn’t available yet on video. Check out his 2015 winning run up the hill.