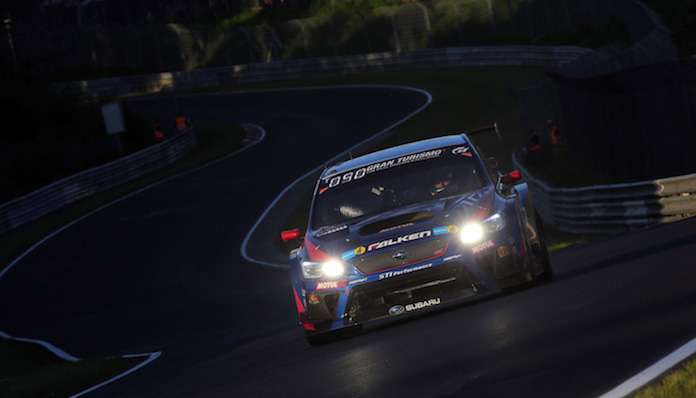 The 2017 Subaru WRX STI is getting ready for the legendary Nurburgring 24-hour race coming up this weekend. It’s starting where it left off last year.
Advertisement

Subaru will be running the WRX STI in the Nurburgring 24-hour race this weekend and they will be defending their title again. Subaru and Subaru Tecnica International (STI) have won what’s arguably the most grueling race on the planet two years in-a-row now, and will attempt their third consecutive class title in its 10th year of participating in the race held in the Eifel region of Rhineland-Palatinate, Germany.

STI has been preparing the WRX STI performance sedan that will run in the SP3T class for turbocharged vehicles up to 2.0 liters. New modifications were made to Subaru’s performance-tuned WRX STI for the 45th Nurburgring 24-Hour race. Subaru says the car has received improvements to increase acceleration and maximum speed. Things are going well at the track as the team prepares for the grueling race.

The WRX STI NBR qualifies in first place round one

The WRX STI got off to a great start on its way to its third consecutive win, claiming the top time in the SP3T class during the first round of qualifying held from 8PM on the 25th. Subaru’s ace driver, Carlo van Dam, took the WRX STI out for an official first qualifying run and ran a quick 9 minutes 13 second lap. Hideki Yamauchi also had a stint in the car, and scored a first place run in the SP3T class with a quicker time of 9 minutes 9 seconds. Lexus was in second place followed by Audi in third.

The 2017 Subaru WRX STI NBR gets upgrades over the production model. The race machine is powered by a 2.0-liter EJ20 AVCS twin scroll turbocharged boxer engine. It develops 335 horsepower (250kw) and 340 lb. ft (461 Nm) of torque. It’s mated to a 6-speed sequential gearbox with a metal twin-plate clutch, 6 pot Brembo brakes up front and Brembo opposed 4 pot brakes out back. It runs on 18-inch BBS alloy wheels wrapped in Falken 260/66 R18 racing tires. The WRX STI NBR has the same legendary Subaru all-wheel-drive system as the stock version.

The 2017 Subaru WRX STI NBR, based on the production version, has also been improved with increased engine output, paddle shifters, and enhanced transmission performance. In addition, the 2017 WRX STI NBR has optimized chassis geometry, improved stiffness balance, reduced body weight, lowered the moment of inertia, and increased front downforce, among other improvements, maximizing the production WRX STI’s speed and responsiveness.

Subaru brings the same winning team back to Germany with STI manager Shigeo Sugaya, and drivers Carlo van Dam (Netherlands), Marcel Lasee (Germany), Tim Schrick (Germany), and Hideki Yamauchi (Japan). All were involved in the victories the past two years. Subaru also brings six top mechanics selected from Subaru dealers around Japan to support the team in the pits. Go to Page 2.

The 45th running of the Nurburgring 24-Hour race will again push both men and machines to the limit. The 2017 Subaru WRX STI NBR is ready for the 5-kilometer long combination of Nordschleife and Grand Prix Circuit. Subaru isn’t satisfied and wants their third win in-a-row and fifth overall in the class. Stay tuned.