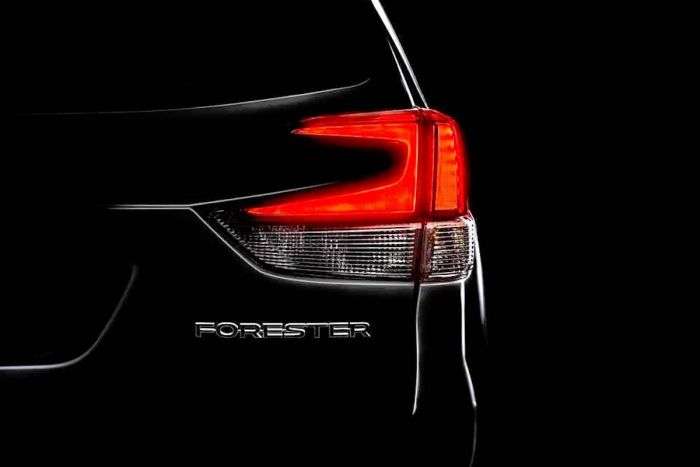 Subaru Corporation announced the all-new next-generation 2019 Subaru Forester will be unveiled at the New York International Auto Show on March 28. Subaru released a teaser image of the fifth-generation Forester showing the right rear taillight. It isn’t much, but it’s almost ready for its public debut. Corporate Executive Vice President, Takeshi Tachimori will do the unveiling in New York.

Consumers can expect big changes on the small SUV. Here’s what upgrades are coming on the new-generation 2019 Forester. The SUV will ride on the new Subaru Global Platform (SGP) with a lower center of gravity improving driving dynamics, get a quieter cabin, and improved safety because of it’s higher rigidity and strength. The new SGP architecture will also reduce vibrations and produce a smoother ride quality in the new Forester.

The standard 2019 Forester 2.5i will get Subaru’s new direct-injection 2.5-liter naturally aspirated Boxer engine and it will likely get a small bump in power over the outgoing model. It will be more fuel-efficient and will be coupled with a newly-revamped Lineartronic Continuously Variable Transmission (CVT) sending power through its standard Symmetrical all-wheel-drive system.

READ: Here’s Why You Should Wait For The New-Generation 2019 Subaru Forester

It’s been reported Subaru could drop the 6-speed manual and change the Forester XT to a new Forester Sport model. This has not been confirmed by Subaru Corp, but a source close to Subaru told us this will happen. If Subaru axes the manual gearbox, all Forester trims will likely come standard with EyeSight driver assist like the Ascent 3-Row making its dealer launch this summer.