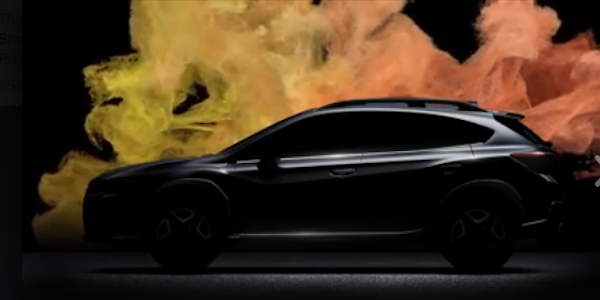 The all-new 2018 Subaru Crosstrek is set to debut at the Geneva Auto Show. Here’s a sneak preview as the new Crosstrek gets closer.
Advertisement

The all-new 2018 Subaru Crosstrek is about make its global reveal. Subaru announced the new crossover will be unveiled at the Geneva Motor Show in March. This is Subaru’s second new-generation model to ride on the new Global Platform. The 2017 Impreza was the first model to introduce the new architecture.

Subaru will unveil the new 2018 Crosstrek (XV in global markets) in 42 days at the 87th Geneva International Motor Show in Switzerland on March 7 to the press. The public will get to see the car March 9 when the gates open. The show runs from March 9-19, 2017.

The 2017 Impreza was the first, now the next-generation 2018 Crosstrek gets the Subaru Global Platform. Here’s what consumers can expect when it arrives in showrooms. The all-wheel-drive crossover will grow slightly in size, ride on an all-new platform, and enjoy better fuel economy with a new-generation direct-injection boxer engine. The Subaru 2.0-liter engine, with the addition of direct injection, will come with a bit more horsepower to 152hp from 148. Expect fuel economy to increase slightly too.

Consumers will see noticeable changes in the 2018 Crosstrek’s driving dynamics. In a nutshell, the new underpinnings will reduce vibrations and produce a smoother ride quality. The body and chassis will be 70-100 percent more rigid which will translate to improved steering response, and the increased rigidity of the suspension mounting will reduce body roll by 50 percent compared to current models like we see in the new Impreza.

The new-gen Crosstrek will also have a lower center of gravity improving driving dynamics in the corners producing a more dynamic ride. Subaru says the new global platform underpinning the 2017 Impreza improves crash energy absorption by 40 percent over present models. Expect the same in the 2018 Subaru Crosstrek. It will also come with several Eyesight upgrades, including the addition of Lane Keep Assist, High Beam Assist, and Reverse Automatic Braking when an obstacle is detected backing up.

The new-generation 2018 Subaru Crosstrek will share many common components with Impreza. It will likely feature a longer travel suspension and the interior will also resemble the new Impreza that launched last year. It’s coming soon to the Geneva International Motor Show in Switzerland on March 9. Stay tuned.