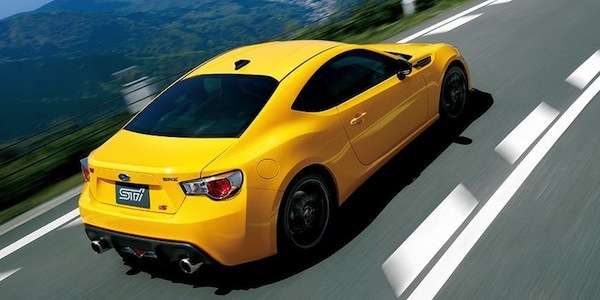 Is a US-spec 2018 Subaru BRZ tS coming to US shores? New trademark applications suggest it could.
Advertisement

Subaru launched the new BRZ tS in June 2015 in Japan, and it may be coming to US shores as a 2018 model. According to reports by AutoGuide, the Japanese automaker has filed for patents in the US for the tS nameplate, which means Subaru may have plans to launch the higher-performance coupe here.

This wouldn’t be a surprise, because Subaru has already announced, Subaru Tecnica International (STI), will produce more STI-enhanced Subaru models in the near future. There could be also a Forester tS along with the recently filed BRZ tS nameplate coming soon.

What sets the BRZ tS apart?

STI and Subaru have released tS versions of the BRZ before and this model gets a few extra upgrades for the suspension and interior over previous models. STI manages Subaru’s motorsport activities and performance division and operates in a separate facility in Mitaka, Tokyo. The company is run by President Yoshio Hirakawa and has developed the Forester tS they released in Japan last year.

Japan’s Subaru BRZ tS gets a number of upgrades to the chassis which are provided by STI. It features a tuned suspension that includes larger STI-designed, black colored 18-inch aluminum wheels with 225/40ZR18 tires wrapped in Michelin Pilot Super Sport performance tires. Stopping power is provided by 17-inch Brembo 4-pot ventilated disc brakes in the front with STI logo and 17-inch Brembo 2-pot ventilated disc brake with STI logo in the rear.

Inside, this STI-enhanced BRZ comes with a number of upgrades that features black leather “Recaro”-designed front bucket seats exclusively made for STI and a speedometer with an STI logo inside. Other upgrades include a black Alcantara speedometer with red stitching, carbon tone instrument panel and ornament (“tS Limited Edition 300”), leather lapped steering wheel with “STI” ornament and red stitching, leather gear knob with STI logo and red push button ignition with STI logo. It also gets a red side ventilation grill, side sill plate with STI logo, special Alcantara door trim with red stitching and shoulder pad with black stitching.

The BRZ tS comes with the same naturally aspirated 2.0-liter boxer engine as the standard model with no power upgrades. It still comes mated to a 6-speed standard gearbox and 6-speed automatic as an option. STI says they “piped in” an engine Sound Creator designed by MAHLE Filter Systems in Japan to further enhance the driving experience inside the cabin. Will performance fans see a new US-spec 2018 Subaru BRZ tS on US shores? Stay tuned.