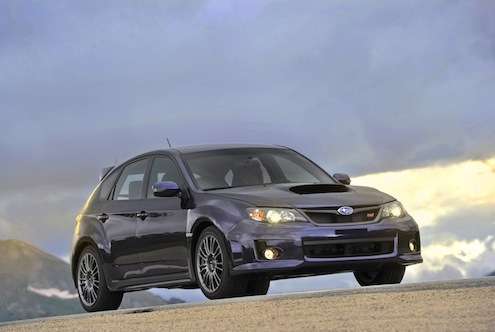 Subaru has plans to broaden the STI performance brand to include more cars in its lineup.
Advertisement

Up until now Subaru had only one true performance vehicle in their lineup: the Subaru WRX STI. But that is about to change according to a report by Auto Car. The report says that Subaru is thinking about expanding their STI brand to include other vehicles in their lineup. The first launch will reveal a new Subaru Forester TS at the Moscow Motor Show.

Up until now, the Forester TS has only been offered for sale in Japan, and the crossover features more aggressive exterior styling along with sporting the STI badging. The Forester version also comes with a sport suspension that includes performance springs and shocks for better high speed handling. The four-door crossover is powered by a 2.5-liter four-cylinder boxer engine that pumps out 259 horsepower and 256 lb. ft. of torque.

The report says that Subaru is testing the Russian market first with the more aggressive Forester. The Japanese company is following the lead of other automakers who have their own internal performance divisions to market their performance vehicles. Subaru is seriously looking to leverage its already popular STI brand to include a broader scope of products.

A company insider told Auto Car, "Russia is the perfect market to trial sales of a more aggressive Forester," said the insider. "but it's clear that STi's abilities and experience could work on other cars in other markets. Confining them to WRX projects doesn't make sense when the demand is there."

Subaru already has other higher performance products that are Japan specific like the competition 2013 WRX STI Spec C. The performance four-door sedan gets special upgrades like a lighter body and a tweaked suspension. The Spec C body is lightened by small but significant changes with an aluminum hood, lighter window glass and a smaller battery. The engine also has more power than the WRX STI we see here in the U.S.

Another more powerful STI version has been announced by Subaru in the UK. The 2013 WRX STI 340R is a higher performance version that has even more horsepower and torque. The new high-performance 340R will produce an insane 335 horsepower and 361 lb. ft. of torque.

We already know that Subaru has been bringing out high-performance WRX STI models around the globe. Now we can look for other STI models to make it to production. While we aren’t sure if any will make it to the U.S., it is likely that they will. We already reported that Subaru is working on a faster version of the 2013 BRX. And it would fun to see the new 2014 Subaru BRZ convertible fall under the STI badging.

Tesla Contemplates A New Strategy for China Retail even As Sales Boom
Jay Leno on Elon Musk & EVs: “I Think He Should Get ... Credit"
END_OF_DOCUMENT_TOKEN_TO_BE_REPLACED