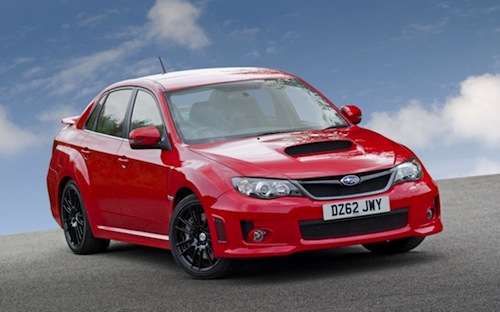 The Subaru WRX STI is already a rocket on wheels, but in the UK, the high-performance car now comes as a 340R with even more horsepower and torque.
Advertisement

Subaru has just announced the WRX STI in the UK will offer a new performance power upgrade called the 340R that will make the high-performance model insanely fast. The new 340R engine upgrade has been added to the lineup and will be available alongside the 320R that was introduced last year. The 320R offers an already healthy 315 horsepower, but the new high-performance 340R will produce 335 horsepower and 361 lb. ft. of torque.

When you put the new UK model along side the U.S. version, you begin to see that the Brits get an unfair advantage. The North American WRX STI comes with 305 horsepower and 290 lb. ft. of torque which is a big difference in power output. While aftermarket kits are available in the U.S. to achieve those numbers, the factory UK upgrades can be added without affecting the car’s warranty.

Subaru has increased performance in the 2.5-liter boxer engine by using different ECU settings. The high-performance 340R also gets an increase in airflow through a new high-flow exhaust system which also provides drivers “with a thrilling soundtrack and the iconic Subaru burble.”

The Subaru announcement says the 340R will accelerate from 0-60 mph in just 4.7 seconds, an improvement of 0.5 seconds over the standard WRX STI. The WRX STI 340R benefits from Subaru’s legendary advanced All-Wheel Drive technology, Torsen rear differential, and fully-independent front and rear suspension. And the increase in torque allows the 340R even stronger acceleration. With that amount of torque, which is 71 more than the U.S. version, it will launch the 340R off the line with incredible force.

“The 340R power upgrade turns our most performance-oriented model into one of the most rapid and charismatic cars available in the UK,” said Darren James, Managing Director of Subaru UK. “The WRX STI was already an exciting car, but improved power and torque, as well as the unmistakeable Subaru exhaust note, make the car even more tempting. In making such a generous price offer, we’ve turned the WRX into one of the best value and most accessible performance cars available in the UK.”

If you want one these incredibly fast UK models, expect to pay around $45,219 which is $10,000 more than a slower U.S. model before options. It’s unfair that the Brits get the Subaru WRX STI 340R high-performance variant and we in the U.S. don’t get the choice. Driving the U.S. WRX STI is a thrilling experience; we can only imagine the power that the 340R has.