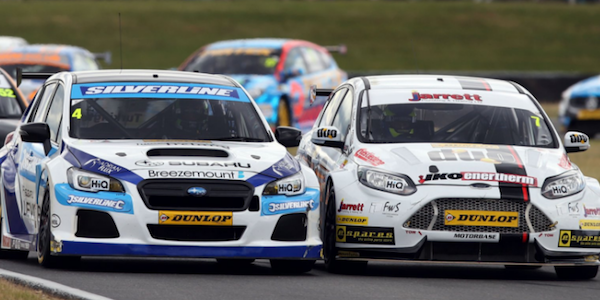 The Subaru Levorg driven by Colin Turkington wins again at the BTCC race this weekend. Team BMR pulled off two firsts for the brand.
Advertisement

It was Subaru’s third British Touring Car Championship win of the year at Snetterton. Silverline Subaru Team BMR Colin Turkington in the Subaru Levorg did it again defeating Gordon Shedden’s Honda in round one this weekend. It was a weekend of more firsts for Subaru.

Shedden who had the pole position, immediately had to battle Turkington who put the leader under tremendous pressure right from the start. Shedden held off the Subaru and was leading in the race until Turkington made a move on the eighth lap of the race.

Turkington kept the pressure on and his perseverance paid off on the eighth lap of the race after managing to engineer a gap on the inside of Shedden's Honda Civic Type-R. After he made his move, Turkington immediately put the hammer down and built a gap between his Subaru Levorg and the Honda Civic Type-R.

Turkington went on to win the race, becoming the first driver to score three race victories this season. He now moves up to 5th in the drivers’ standings, 34 points behind Robert Collard who leads the championship. Subaru’s Jason Plato came in fifth in the race and moves up to 11th place with 124 points.

Silverline Subaru Team BMR have been making big gains this being their first year in the rear-drive Subarus. “It was never going to be an easy race," said Turkington. "I got a reasonable start, but not enough to lead. I just had to be patient and pick my moment. I really wasn't expecting to win a round here as I've never won here in a rear-wheel drive car.”

All four Subarus finish in the top ten

Turkington’s victory was initially subject to the result of the stewards’ investigation into the potential false start, but they ruled in favor of Turkington and his win stands. Team BMR's James Cole and Warren Scott came home ninth and ninth, making the first time all four Subaru Levorg sports tourers finished within the top-ten. It was weekend of firsts for the Subaru Levorgs.