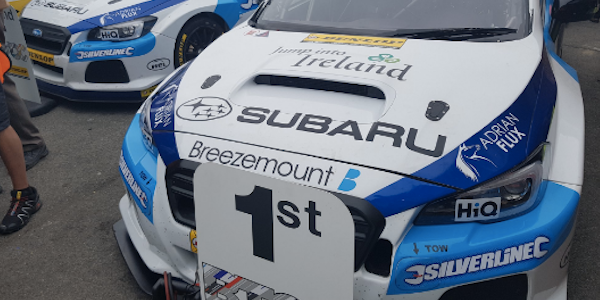 Subaru is getting their new Levorg sports tourer BTCC race cars dialed in. They scored their first 1-2 finish.
Advertisement

Colin Turkington who is called “King of Croft” showed why he gets the nickname. The Silverline Subaru BMR Racing driver piloted the Subaru Levorg race car to another victory at Croft this weekend. He led the first race from start to finish and Jason Plato took second place. The one-two finish is a first for the Subaru team.

Subaru gets the pole again at Croft

Turkington had the pole position, his second in back-to-back races. He was in command for the duration although he had to contend with BMR teammate Plato who was pushing his Subaru Levorg hard. There were also three safety car interruptions and an early attack from fellow front-row starter Daniel Lloyd.

“They certainly didn’t make that one easy for me,” said Turkington. “It was the kind of race where you need to remain 100 percent focused right to the end. To have three safety car periods is quite unusual, and with the tire pressures dropping at the lower speeds, I had to carefully manage all the re-starts which was tricky. With Jason not far behind either, there was absolutely no margin for error, but the team gave us both a fantastic car so massive credit to them all.”

Subaru is getting the Levorg BTCC race cars dialed in

The Silverline Subaru BMR Racing team is getting the Subaru Levorgs dialed in. This is the first season for Subaru in the BTCC and they started off the season with mechanical issues and a fire in one of the cars. But the team is coming on strong. Subaru had its first-ever BTCC win earlier this month at Oulton Park with Turkington behind the wheel. He now stands within striking distance of the leaders in the standings.

“The Subaru Levorg package is getting stronger and we’re not a million miles away with it now. Of course, I’ll have an extra 75kg on-board in race two, which is effectively another me plus all my shopping, so that will obviously take some speed off, but the chassis is working really well so we should still be in good shape.”

The Subaru Levorg team gets a breather as the next race comes up at the end of July. The race takes place at Snetterton, July 30-31. The team can take some time to celebrate as they scored their first double podium finish. Can Subaru get their third win in-a-row? Stay tuned.