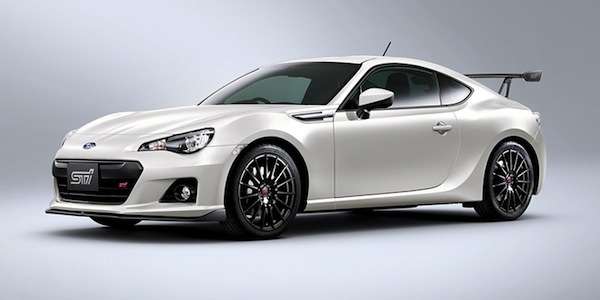 Subaru is reported to be launching a new Special Edition 2015 BRZ here in the U.S. market this year. Will it just get exterior STI badging?
Advertisement

There are new reports that Subaru will be launching a new Special Edition 2015 BRZ two-door-sports coupe in the U.S. market in the next two months. Car and Driver is saying that Subaru and Subaru Technica International (STI) will offer the new BRZ model here in the U.S. soon. But it won’t be a turbo model that everyone is clamoring for. Will it just be a BRZ with some STI exterior treatments?

C&D is saying Subaru will bring the new special edition BRZ with mainly exterior goodies from STI so they can get heir name on the sports car here in the U.S. Subaru launched a BRZ tS in Japan recently and the new U.S. model will likely get special side skirts and a rear wing as part of the package here in the U.S. It could also come with a front lip spoiler, special wheels, and STI badging.

Why does STI want to get their name on the BRZ rear-drive sports car here in the U.S.? It could be Subaru is getting us ready for the BRZ STI we’ve been waiting for and this is the forerunner. But this special edition won’t have any changes to the engine or suspension. It doesn’t sound like it will come equipped similar to the Japan BRZ tS with the new suspension upgrades. What did BRZ tS receive?

STI didn’t just include exterior upgrades to the Japan tS, but also improved the performance of the 2014 BRZ tS. It features exclusive tuning to the chassis like a large-diameter driveshaft and STI's suspension upgrades that improves handling performance. The new tS has improved handling in the corners with the addition of STI upgrades like a new STI rear suspension link with pillow ball bush, STI tuned strut and coil springs for front suspension and STI tuned damper and STI coil springs for the rear suspension.

We know Subaru and Subaru Technica International is working on a new faster BRZ sports car, and STI has been testing the new car on the Nurburgring for month’s now. We don’t know when Subaru will launch a new faster BRZ with engine and suspension upgrades. It could be 2016 before we see a BRZ STI with more than just a few exterior STI treatments and badge.

Until then Subaru is launching a new 2015 Special Edition BRZ with STI treatments to wet our appetites.

Parks McCants wrote on February 18, 2014 - 2:21pm Permalink
Subaru has stolen a handful of design cue's from the Datsun ( Nissan) 240Z of the 1960s. Looks good. I have no doubt that they will sell as many as they are willing to manufacture. Turbo? Not sure it needs one.