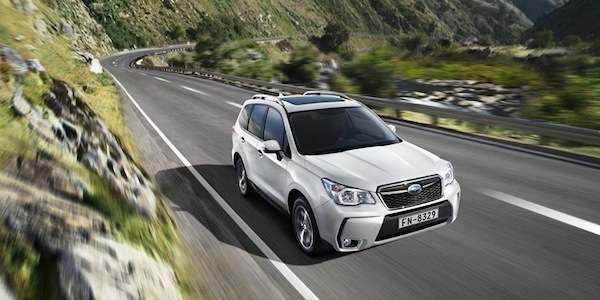 Subaru launches 2015 Subaru Forester in Russia with no 2.0XT [video]

Subaru announces start of sales of the updated version of the all-wheel drive 2015 Forester SUV in Russia. What new upgrades does the new version get?
Advertisement

The 2015 Subaru Forester gets a few new updates over the 2014 model in Russia. The small crossover is known for its all-wheel-drive abilities and Forester received a number of updates in design and new features making it more comfortable on the inside.

In the Russian market Forester will be available with the naturally aspirated 2.0-liter boxer engine (150hp) and the larger 2.5-liter powerplant (171hp). Both variants will come mated to a Lineartronic continuously variable automatic transmission (CVT). For some reason the Russian market will no longer get the 2.0XT 2.0-liter turbocharged model with 241 horsepower. This will be a disappointment for performance fans in Russia.

Subaru’s vast experience building these multi-purpose all-wheel-drive vehicles gives them a distinct advantage over the competition. They’ve been doing it for decades and this is their niche market, so it’s not a surprise the new-generation Forester keeps...read more.

People around the globe aren’t really that much different and Russians like the 2015 Forster SUV for the same reasons Americans do. The new generation Forester has also been chosen the “Light Off Road” Car of the Year in Russia for the second year in a row by the newspaper "horn." People with active lifestyles in Russia chose the 2015 Subaru Forester again because of its off road abilities

The upgraded 2015 Subaru launches in Russia with a few new upgrades, but performance fans get left out and there will be no 2015 Forester 2.0XT performance model.