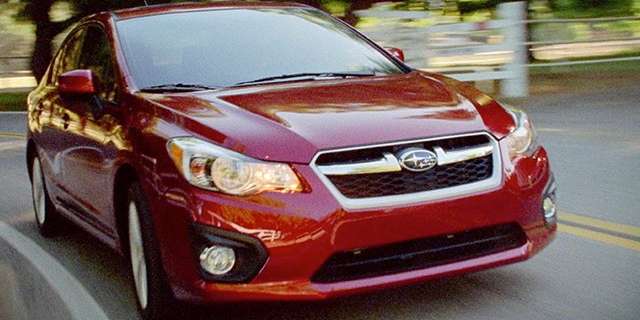 The new 2014 Subaru Impreza has the best year-end financing deal of any small sedan. Just how much can you save?
Advertisement

If you are looking for a great year-end deal on a new small sedan, the 2014 Subaru Impreza offers a very good financing deal. Kelly Blue Book (KBB) has just announced the top ten best year-end deals on new cars. The 2014 Impreza is the top small sedan to make the list. As consumers end the year, many are looking to purchase a new vehicle, and it’s a good time to save money.

The 2014 Subaru Impreza will have a good financing deal, but according to KBB, the new sedan also offers outstanding resale value. The KBB list of top ten vehicles is also about which vehicles offer the best value for the dollar. When buying a new car, shoppers should also consider the return they will receive down the road when they are ready to sell. Although many Subaru buyers keep their vehicles for many years, it’s important to consider how much the car will bring when they do sell it.

That’s where KBB comes in. The editors have compiled a list of the 10 Best Car Deals for December 2013. These come from the category winners of their 2014 KBB Best Resale Value Award. The 2014 Subaru Impreza was the small sedan category winner. From that list, Impreza was also picked because it has the hottest small sedan finance deal available through January 2, 2014.

KBB puts the list out every year, and it gives consumers the best year-end deals on car and trucks. "Whether shoppers are in need of a family car or one fit for off-roading, the list we've put together this month has something for everyone who will want to take advantage of these deals on cars with standout resale values," said Jack R. Nerad, executive editorial director and executive market analyst for Kelley Blue Book.”

What kind of incentive is Subaru offering? Buyers can purchase a new 2014 Subaru Impreza 2.0i that has an MSRP of $18,690 for $17,942 between now and January 2, 2014. The financing will be for 60 month’s at 2.9 percent interest with a monthly payment of $322. The purchase price information from KBB is from what they found others have been paying for this car recently.

The new Impreza gets some new convenience and technology upgrades for 2014. It also comes with fuel economy compared to two-wheel drive compacts, but with the benefits of Subaru’s Symmetrical full-time All-Wheel drive.The new small sedan comes with a host of new technology goodies to keep buyers connected. It comes standard with Bluetooth mobile phone connectivity. All models also gain a MediaHub with Bluetooth streaming audio, allowing quick and easy connection to an iPod or USB.

Buyers can choose more technology with the Impreza Limited Package that features a voice-activated in-dash GPS navigation system with back-up camera. This feature is part of an audio system that includes XM Satellite Radio and XM NavTraffic (subscription required) as well as Bluetooth mobile phone connectivity with voice activation. Impreza has also been rated by IIHS as the safest new small sedan on the planet.

The 2014 Subaru Impreza was picked by KBB for its great resale value and also has the hottest small sedan finance deal available through January 2, 2014. The new Impreza offers much more than what's expected.