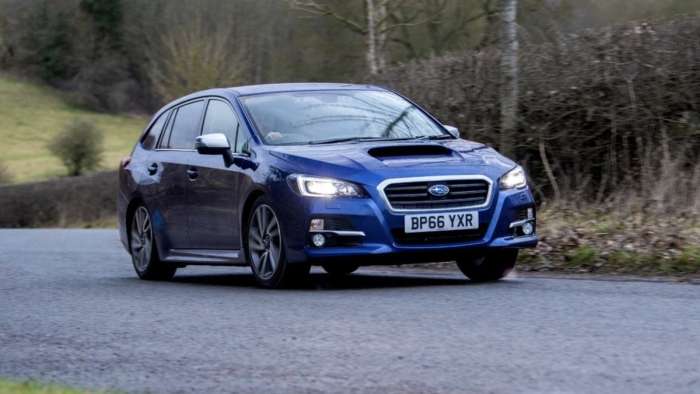 Subaru Dials Back Power In European-Spec Hot Hatch: “We Made It Too Extreme”

It’s the one performance fans in the U.S. want, but Europeans won’t buy it. Subaru dials back power in the European-spec Levorg GT hot hatch.
Advertisement

Subaru brought the Levorg GT hot hatch to Europe, Japan and Australia but now the Japanese automaker has to dial back power in the European-spec model because they aren’t selling enough of them. Subaru Corp just unveiled a new Levorg 5-Door hatchback model at the Geneva Motor Show and they are dropping the hotter 1.6-liter turbo trim because Europeans won’t buy the hot model.

Torbjorn Lillrud, development director for IM Group, the UK Subaru importer says, “We made a misstep with the Levorg and made it too extreme, too sporty. It just wasn’t right for our customers,” he told AutoCar recently at the show in Geneva.

The sporty Levorg GT models with the 1.6-liter horizontally-opposed direct injection turbo "DIT" engine produce 125kW (168 hp) and 250Nm (184 lb. ft torque). The Levorg 1.6 GT accelerates from 0-62 mph in 8.9 seconds and uses a firmer suspension for quicker response in the corners. But Europeans aren’t buying enough of the hot hatches. According to the report, Subaru only sold 90 Levorg GT models across all of Europe in January.

Subaru decided to ax the Levorg 1.6-liter turbo trim in favor of a milder 2.0-liter naturally aspirated (non-turbo) model producing less power (down 20-hp and 38 lb ft of torque). The tamer model will also get a more comfortable suspension. “The combination of that turbo engine and the firm suspension has been a real turn-off for customers,” said Lillrud.

Europe gets mild vs hot

Of course the milder 2020 Levorg 2.0 will come standard with Subaru’s Symmetrical All-Wheel Drive system still making it the ideal sports tourer in all-weather conditions. Subaru said a new higher-quality interior, along with the re-tuned and comfort-oriented suspension and a 2.0-liter naturally aspirated Boxer engine with a “more relaxed power delivery” are the three key changes they made to the milder Levorg.

Maybe Subaru should ship the remaining Levorg GT 1.6-liter turbo models to the U.S. where they would be snatched up quickly by performance enthusiasts. Subaru fans in the U.S. have been asking for a hot hatch ever since Subaru dropped the WRX/STI 5-Door.

Digital doc wrote on March 11, 2019 - 3:12pm Permalink
Seems like this 1.6 turbo is the perfect engine for the Crosstrek. If they think this engine is too hot with a zero to 60 of 8.9, then the company has truly lost their way.
eyedol wrote on March 14, 2019 - 5:52pm Permalink
It's nothing about the sporty aspect of the car. They are blaming the customers for their own mistakes! The 1.6 turbo engine just doesn't reach the required exhaust reguations in europe anymore and subaru doesn't wanted to built in a particle filter system just for this one car. One expensive part they would had to pile up for several years. So they brought the only 2.0 liter engine left in their portfolio (the other 2.0 direct injection engines are also removed from the European market as they would also require a filter system) to this car and softened it up. This engine will not be capable to bring any sporty feeling to this car, so the existing supsension wouldn't match up anymore. Thats the one and only reason behind this change. I'm thinking about how long Subaru will remain on the European market.
Bert wrote on May 21, 2019 - 3:25pm Permalink
First they dropped the legacy with the 2.0 150hp engine and told that it needed to be sportier. Now they figured out that the sportier Levorg is too sporty. Those who actually own the sportier Levorg are extremely content with it (me included). The biggest mistake they made is dropping the legacy in Europe and stop making an estate version of it.
Digitaldoc wrote on May 22, 2019 - 10:35am Permalink
Not sure why Subaru is so antiperformance these days, other than the WRX. I hope that Hyundai N lines their Tucson, and Mazda's turbo continues to sell. While Subarus sales overall have been strong, here in the US, Crosstrek sales have been dropping. I do wonder if the sales would improve if a better engine was offered to make it less lackluster. There are seriously over a dozen reviews saying how great the Crosstrek is, except for the underpowered engine, and Subaru has no interest in addressing the issue.
Bert wrote on May 26, 2019 - 1:12pm Permalink
The Levorg is not a performance wagon. Just a very responsive agile handling car with decent amouth of power. I have no clue where Subaru got there information from that the car is too hot. What I see is that no one actually knows this car exists. They might want to compete with Volvo, Ford, Renault, etc. but these cars have volume market with lots of leasecars. Subarus are privately owned cars for people who like them for what they are. Bring back the legacy and make an estate version. The outback sells well, even for people who never use its offroad capabilities. That makes you think.