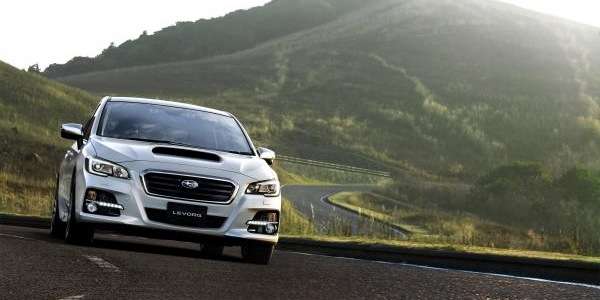 The 2016 Subaru Levorg sports tourer specs and pricing have been confirmed for the UK. The UK only gets one trim, the Levorg GT, but it’s a good one.
Advertisement

UK consumers will be getting the new 2016 Subaru Levorg GT sports tourer and it will go on sale at the end of September. Subaru will price the new sporty wagon from 27,495 British Pounds and will come in a single trim level, the Levorg GT and it will be the spiritual successor to the fourth-generation Subaru Legacy Tourer (2003-2008). What big improvements make Levorg better than the Legacy wagon?

The new sports tourer comes with a smaller footprint than Legacy, but it will come with more leg, shoulder and headroom than it’s successor. Levorg GT boasts 522 liters of cargo room with the seats up and 1,446 liters with the rear seats down. An active generation will use the sporty Levorg for hauling sports equipment, mountain bikes and camping gear for weekend getaways. Subaru has been attracting new consumers to their lineup at a 60 percent rate in the U.S. and it could be the same in the UK.

Fuji Heavy Industry engineers increased the compression ratio in the new turbo engine, but they also wanted the new engine to use regular unleaded fuel. This would give the new Levorg GT a big advantage over the European turbo engines that required higher octane fuels. They succeeded by designing a new downsized turbo engine that had the same power output, used regular fuel, but offered superior fuel efficiency and the same power output of the 2.5-liter.

The Levorg 1.6 GT accelerates from 0-62 mph in 8.9 seconds, while returning nearly 40 mpg on a combined European cycle with emissions of 164 g/km. Of course Levorg GT will come standard with Subaru’s Symmetrical All-Wheel Drive system making it the ideal sports tourer in all-weather conditions. The new 2016 Subaru Levorg GT beats the old Legacy wagon hands down and will likely be as popular in the UK as it is in Japan. Come back tomorrow and we’ll check how Levorg is safer than other Subaru models.

Gareth Evans wrote on September 10, 2015 - 3:19pm Permalink
The Levorg 1.6iGT has inferior UK fuel efficiency (CO2 164 and 39.8 mpg) than the current wider and taller Outback 2.5i SE (CO2 161 and 40.4 mpg). So the 1.6i is less efficient than the current 2.5i engine.
Andrew D King wrote on September 15, 2015 - 8:32am Permalink
With regard to Gareth Evans MPG comparison. This article appears to originate in the US. If so, its a good bet the MPG figures are based upon US gallons that are smaller than our (I'm English) Imperial gallons. The figures for the Levorg 1.6iGT vs. Outback 2.5i SE needs the fuel units clarified. If the Levorg is in US gallons & the Outback in Imp gallons, then when in both the same units, the Levorg will be better. Remember the Internet is world wide, not US only. You need to think global & remove ambiguity of local units of measure. Be more specific so not to confuse ones audience please.
Greg Watt wrote on December 20, 2015 - 1:30pm Permalink
The 1.6Lturbo is great news if you've driven an Impreza. It means that the new generation of that car, due out next fall, might offer more than just awd. I am waiting, regardless, for the newer model, but this really sounds like something worth waiting for.
Subaru Legacy G... wrote on December 4, 2017 - 9:05pm Permalink
2011 Legacy GT has 265 hp & 268 ft-lbs - yes being a 2.5 litre it probably consumes more fuel and yes its heavier but good luck keeping up with it in this thing.