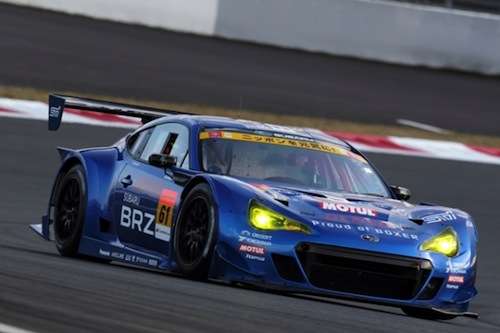 Subaru and Subaru motorsport division Tecnica International Inc. (STI), has announced an outline of its motorsport activities for the 2013 race season. STI manages all motorsport activities for Subaru and is located in Mitaka city in Tokyo. Company president Hiroyuki Karamatsu is excited about the new race season and was on hand at the Tokyo Motor Salon to unveil the new 2013 Subaru Impreza WRX STI that is scheduled to participate in the 2013 24 Hours Nurburgring endurance race.

The race cars for the Super GT race and International Rally Challenge (IRC) are also exhibited at the Salon this year. That would also include the Subaru BRZ GT300, and Subaru BRZ "GAZOO Racing 86 / BRZ Race.” STI announced its entries of the Super GT races, IRC and 24 Hours Nurburgring at their display booth that was designed in the image of a catwalk similar to that of fashion shows.

The "Subaru BRZ GT300" race car, will again participate in the SUPER GT series this year which is widely regarded as Japan's top motorsports category. The race car was built by STI under the supervision of Hideharu Tatsumi, General Manager of STI Motorsport Project Office and uses the same front-engine, rear-wheel-drive layout as the production 2013 BRZ model that is so popular around the globe.

As in previous years, the team will be operated in conjunction with "R&D SPORT" led by Director Shinji Motojima, and Tetsuya Yamano and Kouta Sasaki will be driving for the team. Subaru will be competing for both class and series wins.

STI will participate in the 24-hour endurance race held on May 17-20, 2013 for the six consecutive year in the Subaru WRX STI four-door model. Team drivers Toshihiro Yoshida and Kouta Sasaki both from Japan and two more drivers from Europe will compete in the ADAC Zurich 24-hour race and piloting their cars around the 25-kilometer long combination of Nordschleife and Grand Prix Circuit. For one day and one night the driver of the WRX STI along with the other drivers will push themselves and their machines to the limit. The field of over 200 vehicles will compete while driving full speed for one whole day and night around the longest racetrack in the world.

STI won the SP3T class in the 24-hour race in 2011 and 2012 and will aim at its third consecutive victory this year. Final preparations for the race will be made to the car in the VLN series in April at Nurburgring. As in previous years, service personnel selected from Subaru dealers in Japan will be at the race as part of the teams crew.

At the same level as previous years, Subaru STI will continue to support private drivers who will participate in the FIA World Rally Championship 2 (WRC2) and European Rally Championship (ERC) which was integrated with the former Intercontinental Rally Challenge (IRC). Subaru will make announcements as soon as details and plans are confirmed.

The 2013 Rally America National Championship schedule has also been announced and will include five of last year's events plus the revival of two extremely popular events - the Ojibwe Forests Rally in Minnesota and the Lake Superior Performance Rally (LSPR) in Michigan's Upper Peninsula.

It should be a great race season as the Subaru BRZ GT300 and Subaru WRX STI four-door model compete in the competitive Super GT Series and Nurburgring 24-Hour race.