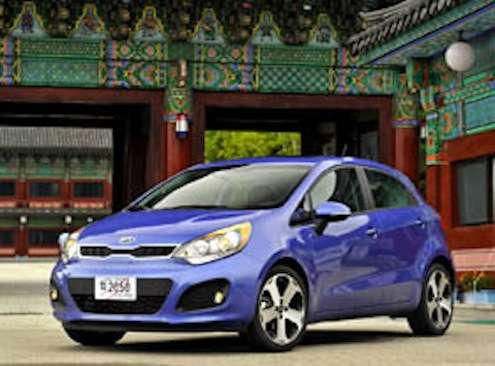 If you haven’t being watching what the South Korean automaker Kia is up to, it would be easy to miss what they are doing in the auto world. Kia is the fastest-growing auto brand in the U.S. over the last five years and they are doing it by bringing out models like the 2013 Kia Rio SX. It’s a good example of the automaker listening to their buyers.

Orth Hedrick, Director of Product Planning at Kia Motors America (KMA) said, "Our customers and the automotive press have been asking for the Rio 5-door SX with a manual transmission, and we've listened. As the Kia brand becomes more and more relevant to enthusiasts, we'll continue to evaluate consumer demand and consider bringing other high-spec manuals to market."

The sporty 2013 Rio SX is now being offered with a six-speed manual transmission for the first time. Kia’s parent company Hyundai, also listened to auto journalists and customers by offering a high-performance tire option on the new 2013 Veloster Turbo. Kia built the high-spec 2013 Rio SX 5-door for driving enthusiasts and it was inspired by Kia's first-year Rio B-spec racing program.

For driving enthusiasts who want to get their hands on the new 2013 Kia Rio SX, they should get their order in soon as less than 500 SX M/Ts will be initially offered for sale during the 2013 model year.