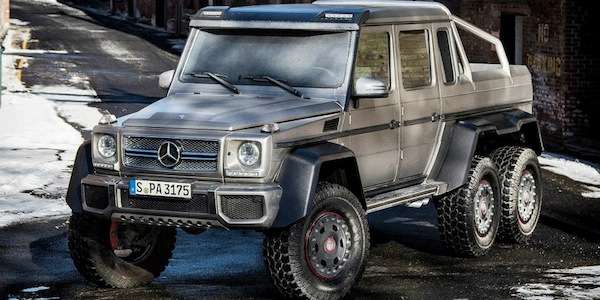 The Mercedes-Benz G63 AMG 6X6 makes U.S. debut in New York for Super Bowl XLVIII and is there as the Seattle Seahawks trounced the Denver Broncos.
Advertisement

We haven’t heard much from the Mercedes-Benz G63 AMG 6X6 beast until yesterday. It arrived on U.S. shores to roam the streets around New York and New Jersey before the Super Bowl. This Mercedes 6X6 is a beast amongst off-road vehicles and there isn’t anything else like it on the planet. It’s an awesome sight and has no equal when it comes to MUVs (Monster Utility Vehicle). It has created its own unique segment of vehicles and its truly a beast.

The Mercedes-Benz G63 AMG 6X6 was roaming the streets of New York and New Jersey the same time as the Seattle Seahawks trounced the Denver Broncos in Super Bowl XLVIII. Mercedes brought it to the U.S. to let fans around MetLife stadium see the massive MUV.

It comes with three portal axles, six beadlock wheels wearing massive 37-inch tires, and is powered by an AMG handcrafted biturbo V-8. How about a 0-60 time in 7.8 seconds? It's impressive when you consider this beast weights in at 9000 lbs. Its AMG powerplant produces 544 horsepower that drives the 6X6, and comes with an ultra-low-range, five differential locks, portal axles, tire pressure control system and a special chassis built to go anywhere on the planet.

And where most other vehicles would bite the dust, this monster will keep on going. It could be described as extreme, ultimate, beast, massive, and monster. Leave it up to Mercedes-Benz and AMG to come up with a new vehicle segment that blows away everything else on the planet. Just like the Seahawks destroyed the Broncos, this MUV will do the same to the competition.

But it won’t come cheap. The huge G63 AMG 6X6 will have a sticker price of 350,000 euros ($457,000) making it the second most expensive vehicle Mercedes offers behind the new SLS Electric Drive. Why did Mercedes produce such a monster? It's for the ultra-wealthy who want the ultimate off-road vehicle.

It is set to be produced by Mercedes-Benz's Austrian partner Magna Steyr and is an even more rugged version of the G320 CDI conceived and engineered for the Australian army and in operation since 2011. But the massive off-roader will be ultra-exclusive. Mercedes says they will only be producing a limited number (around 20-30 examples) for a select few individuals with enough money to order one.