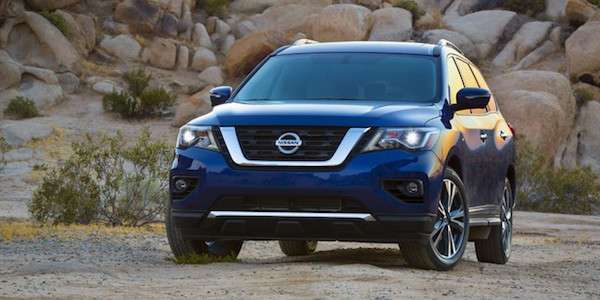 The Nissan Pathfinder is a tale of two different animals. It started its life as a rugged off-road SUV that helped create a new segment. As American consumer’s needs changed, Pathfinder reinvented itself into a family-friendly hauler. For some unknown reason, Nissan felt the need to take the vehicle back to its truck-based roots. Now, Pathfinder in its fourth generation, goes back to being a three-row family vehicle. The 2017 model is still more refined than those early years, but it gets a few new upgrades for adventure enthusiasts. Hopefully Nissan stays with the current configuration, because it’s pretty good for families. Let’s see why. This week we test drive the 2017 Nissan Pathfinder Platinum 4WD model.

It’s Nissan’s "Year of the Truck” and one of their new upgraded remodels is the Pathfinder. It’s not a truck, but upgrades include it getting increased power, greater towing capacity, a tweaked front and rear design, a larger standard touchscreen, additional feature content, and revised steering and suspension.

Only the Platinum can be equipped with the Family Entertainment package ($1,700) that adds two 8-inch, headrest-mounted displays, USB and HDMI ports, and a DVD player. Total MSRP as tested: $46,160 including destination. 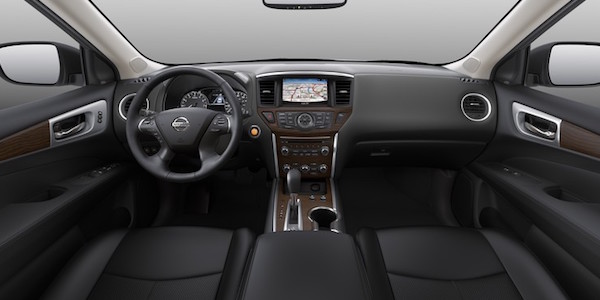 There’s not many changes to the 2017 Pathfinder interior except for a new improved touchscreen interface that's standard across all trim levels. It’s bigger and also features improved graphics and responses. It's one of the more user-friendly tech interfaces we’ve tested. Up front, seats are comfortable and supportive but they could use a little more bolstering for more spirited driving. The materials quality and fit and finish is top notch in this Platinum model. It’s got all the creature comforts families will appreciate like heated and cooled front seats, heated second row seats, a motion-activated lift gate and tri-zone auto temperature controls.

Parents with small kids will love the third row and how easy it is to access. Pathfinder features access to the third row without any adjustment to a Latch and Glide child seat in the center of the second row. The second row also slides forward to give the third row more legroom. It’s roomier than most third rows, with low cushions and a raked back, but it’s still mostly just for kids like all 3-row vehicles. More on Page 2.

Nissan definitely had families in mind when they designed this fourth generation Pathfinder. It features lots of bins and trays in the back, and no less than three bottle holders in each rear door panel, along with cupholders on each side of the third row, and another four up front. It’s a good vehicle for those long trips. 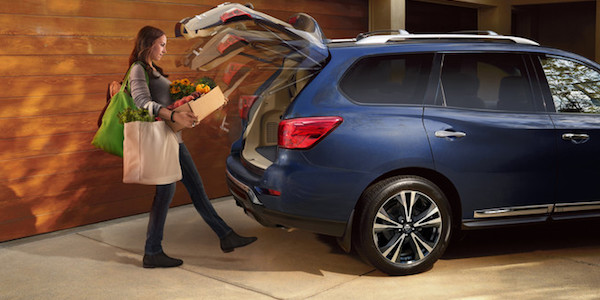 The big news for the new fifth generation Pathfinder is its new 284-horsepower 3.5-liter V6 engine with Direct Injection. That’s a 24hp bump from the outgoing model. Torque also increases from 240 lb-ft to 259 lb-ft in the new model. For those who will be towing, Pathfinder has a new 6,000 lb. standard towing capacity up from the 5,000 capacity for the 2016 model.

For 2017, the Pathfinder gets revised steering and suspension and we could tell from behind the wheel. The Crossover delivers a sharper driving experience. We could especially tell as we pushed it hard around tight mountain curves west of Denver in the mountain terrain. There seems to be less body lean and the vehicle felt more in control and flatter when we pushed it around turns. On the dirt roads, we did feel sharper impacts over the rough spots. 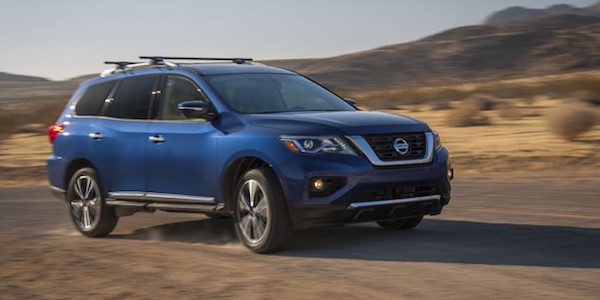 On the open road, Pathfinder’s ride is smooth and pleasant, making long trips a breeze. The cabin remains quiet at higher speeds and the wind noise is kept to a minimum. On the highway, the crossover powers along like a softly sprung sedan, and its lighter weight can be felt in the way it handles the city streets. The only complaint we had in traffic, is the small back window inhibits visibility straight back. In fact Consumer Reports rates it one of the worst for rear visibility. Pathfinder does feature the around-view monitor with moving object detection, rear-cross traffic and blind spot warning and are all useful safety features. More on Page 3.

The newly-updated 3.5-liter V6 offers up plenty of power for all driving situations. Even with a full load of cargo and people, the Pathfinder has enough power to accelerate to highway speeds with relative ease. We even thought the upgraded CVT automatic’s simulated shift points almost felt like a conventional transmission. Nissan has done a good job of improving the 2017’s drivetrain.

This tester came with all-wheel-drive making it a highly capable all-weather family hauler that will keep you safe. The intuitive AWD system allows the driver to select front-drive only, (for optimum fuel mileage) or all-wheel-drive depending on the conditions. It works with the power electronically dividing between the left and right sides,, as needed depending on the traction needed at those wheels.

Families needing three rows will want to look at the new 2017 Pathfinder. It’s more car-like than SUV with a lower load height and weight resulting in a more refined ride. It’s got a powerful V6 engine, good fuel mileage, offers the versatility of a crossover and offers all-weather capability. For adventure seekers, the upgraded 2017 Nissan Pathfinder offers more adventure capability, more power and towing capability, a freshened exterior look and enhanced safety and technology. Pathfinder does a lot of things well.