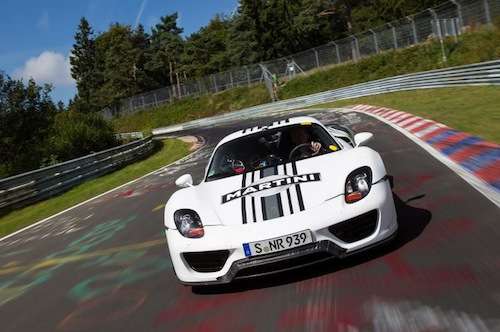 The 2014 Porsche 918 Spyder had a developmental goal of running a lap time of less than 7:22 at the Nuburgring and they blew that away this week.
Advertisement

Last month we reported that Porsche announced the 2014 Porsche 918 Spyder had a developmental goal of running a lap time of less than 7:22 at the Nurburgring-Nordschleife. The German automaker said the innovative plug-in hybrid which made it’s debut at the 2010 Geneva Auto Show was entering “the next phase” of driving trials and engineers had some ambitious goals for the futuristic supercar.

Those goals were not only met, but exceeded this week. According to a release by Porsche, the super sports car officially ran a 7 minute, 14 second lap time at the Nurburgring-Nordschleife. The supercar did it outfitted with an optional Weissach Package and street legal tires. Porsche in their release said, “any questions left”?

The Porsche 918 Spyder is incredibly fast and has certainly answered any questions that skeptics may have. The images released by Porsche show the 918 Spyder that set the 7:14 lap time was a Martini-liveried car. The incredible time beats the Corvette ZR1 and Nissan GT-R. It’s as fast as the Lexus LFA and comes close to the vaunted Viper SRT-10 ACR.

What makes the lap time of 7:14 even more interesting is the fact that the Porsche 918 Spyder gets a fuel-sipping 78 mpg. The Porsche 918 Spyder accomplished that by using an advanced plug-in hybrid drivetrain consisting of a mid-mounted 4.6-liter V8 engine, two electric motors and seven-speed PDK dual-clutch gearbox.

The combined output produces a whopping 795 horsepower. The 918 Spyder is capable of producing a torque output of 626 lb ft at 2000 rpm using the V8 and electric motors. The optional Weissach Package was included on the test run which removes the audio system, air conditioner and “numerous other comfort” items which saves close to 77 pounds from the supercar. Porsche is predicting zero-60 mph times of under 3.0 seconds and a top speed of 202 mph.

Porsche is limiting the production number to just 918, and the supercar will have a price of $845,000. The 2014 Porsche 918 Spyder is expected to enter production in September 2013 and will be in U.S. showrooms soon after in early 2014. But it’s likely that all 918 examples will be already spoken for.