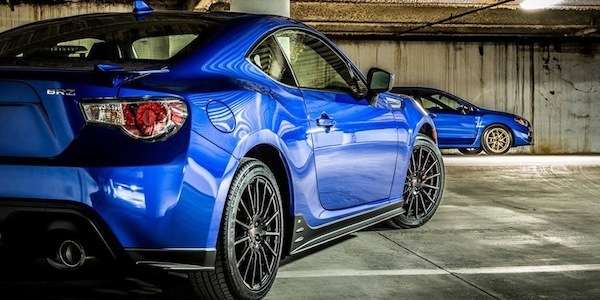 The arrival of new 2015 Subaru WRX STI as well as price cuts to existing models like the 2015 BRZ have contributed to the brand’s strong growth in the UK in 2014.
Advertisement

It’s not too surprising because Subaru is passing along the benefits of more favorable exchange rates to UK sports car enthusiasts. The rear-wheel drive BRZ SE sports car received a price reduction, making it a far better value than the nearest rivals. Subaru announced the price reduction back in May 2014 of $2500 British Pounds on BRZ which was significant. That’s about $4200 in U.S. dollars.

Also because of the more favorable exchange rates, the new 2015 WRX STI went on sale in the UK with a $4,000 British pounds price cut over the previous model. Demand soon outstripped supply with Subaru UK having to import greater quantities than planned towards the end of last year. Subaru’s flagship performance model arrived in UK showrooms in May, priced from 28,995 (OTR) and the new-generation performance car’s sales exploded.

Subaru announced UK buyers will also be getting the all-new Levorg sports tourer that has been a big hit in Japan. The sporty Levorg will begin arriving in UK showrooms this fall. Driving enthusiasts will now have three sporty models to choose from and the new 2015 Subaru WRX/STI and 2015 Subaru BRZ are leading the way for another strong sales year for Subaru in the UK.