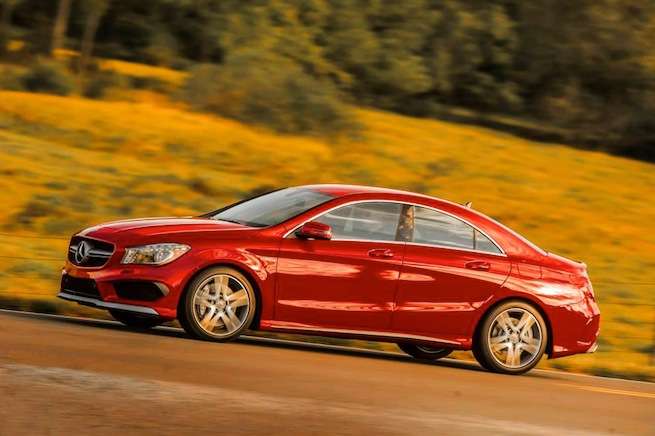 The all-new 2014 Mercedes-Benz CLA-Class has only been in the U.S. for a week, and it’s already selling at a blistering pace.
Advertisement

Mercedes-Benz may have to increase production of the new CLA-Class if sales continue at the same blistering pace in its first week in the U.S. Mercedes is undergoing a recalibration as they bring on the new premium compacts to a whole new generation of global buyers. Mercedes expects the all-new 2014 CLA premium compact to be the new gateway to the brand and it’s already successful after only a week on U.S. shores.

Mercedes-Benz USA reported the highest September sales in its history with 27,474 units sold across all Mercedes-Benz model lines. The new CLA-Class four-door coupe sold over 2300 units after just over a week on the market here in the U.S. And some dealers haven’t even received shipment of the luxury compact car yet. If sales continue at this rate, Mercedes would sell over 110,000 CLA’s in the U.S. alone.

Mercedes fully expected the new stylish four-door coupe to be a hit with younger buyers, but it could be a new icon for the German brand. In the press release, Steve Cannon, president and CEO of MBUSA said, "We're making history this month and not just in terms of our record sales pace, September marked a recalibration moment for Mercedes-Benz as we began delivery of our new gateway, the CLA, to dealerships across the country. After just over a week on the market, this car sold more than 2,300 units. We're confident the CLA will be a driving point of our success as we head toward another banner sales year."

September sales for the Mercedes-Benz brand were led by the C-, E- and M-Class model lines. The sporty C-Class took the top spot at 6,389 units sold, followed by the E-Class with sales of 5,647 vehicles, up 17.0%. MBUSA's top-selling SUV, the M-Class, rounded out the top three at 3,180 units, a 30.4% increase over the same period last year.

But it looks like the new CLA will be wildly successful not only in the U.S. but around the globe as well. It has the kind of stylish appeal that will attract millennial buyers everywhere in the world. And it’s one of the most high-tech cars around, and it will keep a new generation connected.

And look for the new CLA 45 AMG, with the world's most powerful four cylinder engine, to be a big seller with performance oriented buyers. AMG is selling well in the U.S. as buyers are looking for cars that will perform on the street or track. The company's high-performance AMG models finished the month with sales of 675, up 48.4% from September 2012.

Look for the recently launched 2014 Mercedes-Benz CLA-Class to be the gateway to the brands success around the globe. It’s already starting out at a blistering pace. Stay tuned to Torque News for the latest CLA news.

Tesla Contemplates A New Strategy for China Retail even As Sales Boom
Jay Leno on Elon Musk & EVs: “I Think He Should Get ... Credit"
END_OF_DOCUMENT_TOKEN_TO_BE_REPLACED