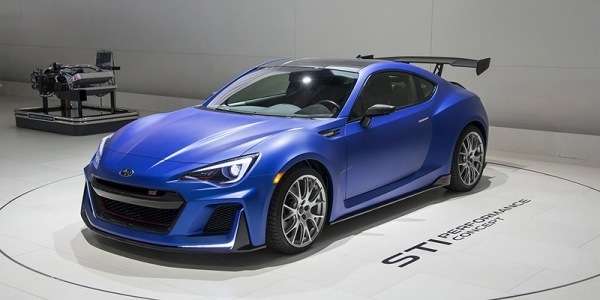 No Subaru turbo BRZ is launching but BRZ STI confirmed for U.S.

At the New York International Auto Show this month, Subaru announced plans to bring more STI models to the U.S. The Subaru BRZ STI will reach production. Will fans see a turbo model?

The good news for performance fans is that Subaru will produce a new generation BRZ STI. The bad news is, Subaru will likely not be building a production BRZ with a turbocharged 2.0-liter model. That’s what Automotive News is reporting that Michael McHale, Director of Corporate Communications at Subaru of America told them. It looks like a new generation BRZ STI could reach U.S. shores in two years.

McHale told AN that as part of the Subaru Tecnica International (STI) expansion plan in the U.S., this market will get an STI version of the BRZ in "a couple years." Subaru and McHale have not said what the exact engine or chassis specs the new BRZ STI will get. The branding of the U.S. STI models has also not been decided yet. But it may be billed as a BRZ "tuned by STI," spokesman Michael McHale said.

STI’s expansion in the U.S. could be Subaru’s answer to their Japanese rivals who are expanding their performance branding. Toyota plans to expand its Toyota Racing Development line, Nissan is doing this with its Nismo editions and Honda just released a redesigned Civic Type R hot hatch with 300-plus hp.
Fuji Heavy Industries Ltd. (FHI), the manufacturer of Subaru automobiles, announced the STI expansion in the U.S. in a big way with the unveiling of the “STI Performance Concept” at the 2015 New York International Auto Show. As reported by Top Gear, this BRZ STI pumps out 450bhp even though Subaru officially quotes power at 345bhp and 332 lb ft of torque.

Dominik Infante, National Manager, Product Communications for Subaru told TG.com the concept car actually produces closer to 450bhp. "They quote it lower on the stand, but that's just an agreement between the...read more.

Under the hood, it showcases the 2.0-liter turbo engine Subaru deploys in Japan's SUPER GT racing circuit: a horizontally-opposed, four-cylinder, double-overhead-camshaft, with 16-valves. It shows what STI is capable of from their motorsports involvement. Automotive News reports Subaru says, “Though, that it has no plans for a turbo BRZ production model.”

The rear-drive Subaru BRZ sports coupe is the odd duck in the brands lineup and doesn’t really fit the niche market that is making the Japanese automaker so successful. It’s their multi-purpose all-wheel-drive vehicles like the Outback, Forester, XV Crosstrek models that are driving the brands success. Subaru won’t build a turbo model that will priced above what the market will support. It looks like a BRZ STI is coming in the next two years. Don’t be surprised if the 2.0-liter boxer powerplant remains naturally aspirated.