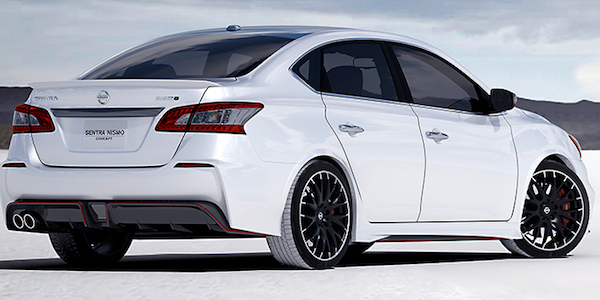 Is Nissan Launching a New Sentra NISMO This Summer?

The Nissan Sentra NISMO Concept was introduced at the 2013 LA Auto Show. Will it launch this summer?
Advertisement

Nissan introduced the high-performance Sentra NISMO Concept in LA in 2013 and it got performance fans excited about the prospect. Nissan said it was the very latest in a long line of compact Nissan performance sedans like the Datsun 510 and the original Sentra SE-R. Will we see the Sentra NISMO as production model?

According to reports by AutoGuide, the Sentra NISMO has been spotted in LA again, this time a camouflaged model was spied in downtown Los Angeles. Reports say it could arrive in Nissan dealers as a 2017 model some time this summer. Under the heavy camo, it was outfitted with more aggressive styling, a new front lip spoiler, LED fog lights, large side skirts and out back, it featured a deck lid spoiler with larger dual exhaust.

While we don’t know what will be under the hood of the new Sentra NISMO when it arrives, the Sentra NISMO Concept was powered by a 240-plus horsepower turbocharged 1.8-liter 4-cylinder powerplant with 240 lb. ft of torque. It was mated to a 6-speed manual gearbox. It also featured NISMO-tuned suspension and steering, custom driver-focused interior, enhanced aerodynamics and large 19-inch RAYS aluminum-alloy wheels and wrapped in 225/35R19 Michelin Super Sports.

Fans have been asking for it

Nissan Vice President of Product Planning, Pierre Loing said in 2013, ”Fans have asked that we bring back a high-performance Sentra straight from the factory, just like in generations past. With NISMO, our in-house motorsports arm already producing versions of the 370Z NISMO, JUKE NISMO, JUKE NISMO RS and upcoming GT-R NISMO, we wanted to demonstrate where we could go in the future."

This is Nissan’s answer to the Honda Civic Si and Ford Focus ST. It will likely be a big hit with compact performance fans. While it’s not a hot hatch, the compact performance sedan market is one of the fastest growing segments and Nissan wants to tap in to it. Will we see the new 2017 Nissan Sentra NISMO in showrooms this summer? Stay tuned.