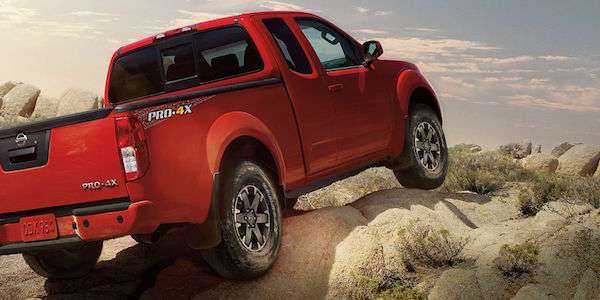 The Nissan Frontier is a pickup with a strong and loyal following, and it comes from its interesting past. Even though it’s getting long-in-the-tooth and in need of a remodel, its followers are loyal and aren’t switching brands. Here’s a brief rundown and history of the Frontier and what made it so popular with small-to mid-size truck fans in the US. In other global markets the Frontier is known as the Navara.

Nissan Frontier started out as a small pickup truck that replaced the Nissan D21 Hardbody truck. In 1999, Nissan introduced the Frontier Crew Cab, the first compact truck with four full-sized doors. A complete redesign in 2004 pushed the pickup into the mid-size truck segment and it’s when it began getting popular in the US.

In 2005, the all-new Frontier was launched with the most powerful V6 engine in its class. Minor changes to the trim levels were the only updates in store for 2006. In 2007, things changed and Nissan added a new Crew Cab Long Bed trim that measured six feet. V6 models saw reduced emissions and a seatbelt reminder for passengers was made standard. 2008 was the year technology upgrades were added to the Frontier. A new fascia up front along with new headlights and a gauge cluster were key features of the 2009 Frontier.

2010 saw standard stability control system, front side impact airbags and side curtain airbags added for improved safety. The Frontier would see only minor changes though 2012. In 2013, the engine was updated to improve fuel economy and create a smoother-shifting drive. Optional climate control and backup camera as well as new GPS debuted during the 2013 model year as well.

Why it’s a fan favorite today

Frontier’s multiple honors including Edmunds 2011 TopRecommended Compact Truck and J.D. Power and Associates’ Highest Ranked Midsize Pickup in Initial Quality in 2010 have helped in its popularity. The safety of the Frontier has also received recognition, with the Frontier winning multiple safety awards, such as theNational Highway Traffic Safety Administration’s 5-Star rating in side-impact tests and the Insurance Institute for Highway Safety’s Top Safety Pick designation. But it’s the trucks reliability, power, towing capacity and comfort that keep Frontier fans coming back.

The current generation Frontier sits under the brand’s full-size Nissan Titan and competes against Toyota Tacoma, Chevrolet Colorado and GMC Canyon. The 2017 Nissan Frontier is offered in either King Cab or Crew Cab sizes and has five different trim levels to choose from; S, SV, Desert Runner, Pro-4X, and SL. The Nissan Frontier is due for a complete redesign and the new-generation model should be introduced later next year. Stay tuned.

Dave wrote on December 29, 2016 - 4:48am Permalink
Very very stout little truck may be long in the tooth on creature comforts but the underpinnings are stout . sitting on a 1/2 ton chassis with Nissan's renowned reliability hard to beat this truck in the midsize segment Toyota has had very bad rust out problems with the Taco GM's midsize offerings as good as they are still has to prove they are reliable before Nissan Frontier owners notice them. Ford is the ? if they bring the ranger and it is all aluminum and stout they can steal the show
Robert C wrote on December 31, 2016 - 11:27am Permalink
Truck is old and inferior interior.. get the navarra here with 2.8 Cummins and Android and Apple play. Let's go feet draggers. The whole world has the navarra and USA is last. #verydissapointed #slownissan
spmaudio wrote on January 1, 2017 - 8:42pm Permalink
I've been following the Frontier lately, and am wondering if it being the smallest truck in its segment has anything to do with its popularity lately. While big may be a selling point, small has its advantages too: Less space taken up in garages, and ease of parking. (Parking is a serious consideration for anyone who spends a lot of time in congested areas, like big cities and parking garages.) Whatever you do Nissan, keep the Frontier as compact as you can please!!
Richard Ladner wrote on September 19, 2020 - 4:50pm Permalink
In 2004 I bought a Nissan D-21 reg cab truck and since I'm a small man 5'6" it fit me perfect and just two years ago had a hankering for an ext cab truck and bought me a 1997 yes you have it a Nissan Frontier and discovered that it was pretty much wasted space since I'm not a circus performer and the truck didn't have rear doors so I went to my local Nissan dealership to checkout the new 2020 crew cab sv and had full out sticker shock, but found me the same truck in a used 2012 with only 67k miles and once again am a happy Frontier owner although I still like the smaller version better. Why couldn't they have just added 2 back doors. I blame it on the fast-food places making us all too FAT for the 97 truck!