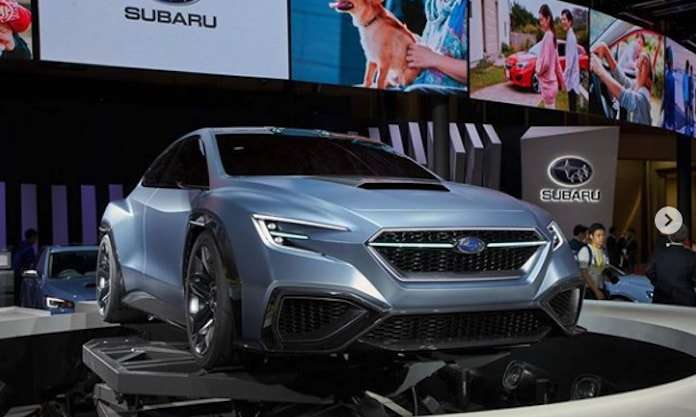 The next-generation 2020 Subaru WRX/STI is coming with radical changes outside and under the hood scoop.
Advertisement

Gone may be the days when you hear a new 2020 Subaru WRX or WRX STI with the popular Subaru rumble. Radical changes are coming when the next-generation model hits U.S. shores in late 2019 as a 2020 model year.

Subaru Corporation’s design chief Mamoru Ishii told Autocar, after the VIZIV Performance Concept’s reveal at the Tokyo Motor Show in October, fan feedback was very positive, and the new-generation Subaru WRX and WRX STI could have similar lines. Subaru’s production cars rarely look anything like their concepts, so we will wait for that to happen. Remember the WRX Concept?

Ishii tole AutoCar, “We have built up this tradition with the Legacy, Impreza and WRX,” he said. “We want it to look fast even when it is parked.” But there could be even bigger changes coming under the hood scoop of the new-generation Subaru WRX/STI. Subaru won’t ever change it from all-wheel-drive, but what powers the new performance car could be radically different.

Ishii, went on to say,“Four-wheel drive is critical to the power and performance levels our customers expect, but on the engine we have more freedom.” The engine Subaru’s design chief is talking about could offer up hybrid, plug-in-hybrid and all-electric power to those four wheels in the next-generation model.

The new-generation WRX STI will be underpinned by the new Subaru Global Platform, first seen on Impreza and Crosstrek models, which Subaru can use with gas engines, plug-in hybrid technology and full electric powertrains. So it’s likely, the new-gen 2020 WRX/STI will start out being gas-powered, and switch a few years later to hybrid power.

Subaru Europe’s sales and marketing manager David Dello Stritto recently told Dutch website AutoRAI after Subaru axed the WRX STI in Europe, “There will really be a new WRX STI in the future, but it takes time. We’re not giving up on “fun to drive”. The new Impreza delivers this fun in a different, more sensible, CO2 emissions-compliant way.” Stritto confirmed that the WRX STI’s 2.5-liter turbocharged boxer powerplant “can simply not exist in the future”.

Whether performance fans like it or not, the fifth-generation 2020 Subaru WRX and WRX STI will not only look different on the outside, what powers its four wheels will be radically different.

At Torque News we value your opinion. Let's discuss it. What do you think about an all-electric WRX STI? If you liked this article and think it may interest your friends, consider sharing or tweeting it to your followers.

Sebastian wrote on December 25, 2017 - 1:11pm Permalink
It's always the same. Subaru will radicallly change a car ... nice prototype and later the same smoothy line, not big changes.
Halim wrote on December 30, 2017 - 8:08am Permalink
I guess Subaru can still follow LFA's footstep by using speakers to produce the boxer rumble. I'm all for Subaru using newer energy tech which may reduce vehicle weight by 200 kgs, and that in itself will yield HUUUUGE performance advantages.
Ian wrote on December 10, 2018 - 10:01am Permalink
I own a '14 Hatch WRX. Love the car, and rumble, but after driving some all electric cars, the only car I would trade in for is a plug in hybrid STi hatchback, like the volt - where the motor is a generator. I am ready for instantaneous torque and cheap commuting.