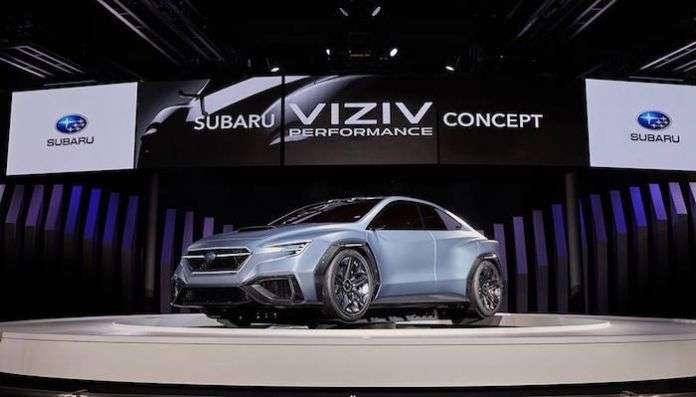 The Coming Subaru WRX STI Fans Won’t Be Ready For

There’s a new era of eco-performance coming to Subaru. When will the WRX STI get plug-in-hybrid power?
Advertisement

When Subaru UK announced they were axing the 2018 Subaru WRX STI, it was a signal that things are changing quickly in the performance car world. Mitsubishi also axed the Lancer Evolution and the Japanese automaker is replacing it with a hot electrified hatch Crossover. Will the WRX STI see a similar fate?

According to a report by Dutch website AutoRAI, the coming Subaru WRX STI won’t be powered by a 2.5-liter turbocharged boxer engine. AutoRAI interviewed Subaru Europe’s sales and marketing manager David Dello Stritto and gets some interesting information. Dello Stritto confirmed that the WRX STI’s 2.5-liter turbocharged boxer powerplant “can simply not exist in the future”.

What will power the Subaru WRX STI in the future? It’s likely to get plug-in hybrid technology being developed now by Subaru Corporation, in collaboration with Toyota, Mazda, and Denso. Subaru is already developing new twin-turbo boxer engines like the 2.4-liter recently revealed by a Subaru source coming in the all-new Ascent 3-Row Crossover.

WRX STI will get a new powerplant

Subaru could mate their WRX-sourced FA20 2.0-liter Turbo DIT with an electric motor to drive the rear wheels for the new coming hybrid WRX STI. Or, it could get an all-new fuel-efficient twin-turbo boxer coupled with the plug-in hybrid technology coming soon in 2018 (likely in the Crosstrek). Subaru says an all-electric model is coming in 2020, but it will likely be the Ascent, Forester, Crosstrek or Outback model, and not the performance-oriented WRX STI.

The VIZIV Performance Concept unveiled at the Tokyo Motor Show, only revealed Subaru will keep a boxer engine and Symmetrical all-wheel-drive in the next-generation WRX STI coming in 2020. We do know the new-generation WRX STI will be underpinned by the Subaru Global Platform, which Subaru can use with gas engines, plug-in hybrid technology and full electric powertrains. So it’s likely, the new-gen model will start out being gas-powered and switch a few years later to hybrid power.

When is a WRX STI plug-in-hybrid coming?

Dello Stritto did not say when the new plug-in hybrid STI would see production. He did say, “There will really be a new WRX STI in the future, but it takes time. We’re not giving up on “fun to drive”. The new Impreza delivers this fun in a different, more sensible, CO2 emissions-compliant way.”

What will be unfortunate when the new engine technology arrives, WRX STI fans won’t be able to easily modify the new plug-in hybrid STI. Currently, there’s a multitude of engine mods from Cobb and other aftermarket suppliers, fans can upgrade the STI’s 2.5-liter with to bump up horsepower and get the Subaru rumble. It may not be that easy with the new powertrain.

With the global push to get rid of internal combustion engine (ICE) vehicles, all automakers are looking at developing alternative power using hybrid and fully electric powertrains. According to a report by IHS Markit, they say in about 12 years (2030), 50 percent of the global automotive market share will be a combination of plug-in hybrid and all-electric powertrains.

Subaru fans will see the STI get this eco-performance technology sooner than anyone thinks. The global tipping point for the end of the internal combustion engine is in sight, and a new era of an electrified Subaru WRX STI is coming to a Subaru dealer near you.

Ed B wrote on December 8, 2017 - 11:30am Permalink
Sorry, I can never get excited about Subaru's concept cars. The final productions are nowhere near the teaser designs we routinely see from Subaru. I guess the vision folks get left out of the production folks meetings.