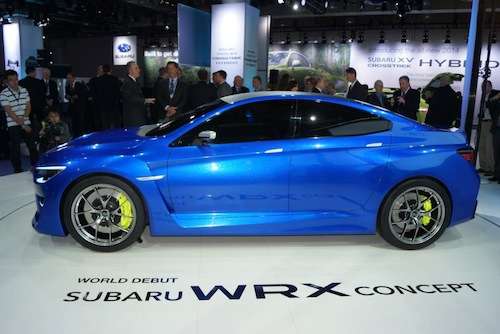 Subaru released an official video of the WRX Concept, explained by design chief Osamu Namba that points to the future performance of the next-generation WRX STI.
Advertisement

When Subaru unveiled the new WRX Concept at the New York International Auto Show, it brought much attention from Subaru performance fans. This new WRX is very likely the preview of the next-generation Subaru WRX STI and we can definitely see what the future design language will be. Subaru doesn’t give many specifics on the performance numbers, but hints that its underlying power will be substantial. Subaru has released an official video that explains the key exterior design language on the new WRX Concept by Design Chief Osamu Namba from the Subaru Design department. But what does the video tell us about the next-generation WRX STI?

We know that Subaru is committed to performance, and the new WRX Concept gives us a good idea of what the future holds for the Japanese brand. Osamu Namba talks about the new Subaru WRX Concept that was unveiled in New York. He touches on the key concepts of the WRX Concept that will be likely be featured on future WRX models. The new vehicle moves the brand forward in styling that will incorporate both current Subaru family features and new designs not seen before.

Namba starts at the front of the new WRX that features familiar features that can be seen in all Subarus. The concept features the Subaru family hexagon grille and the new hawk-eye headlights. The first thing out of the design chief’s mouth is how the new lights are mounted lower and wider and it will help to reinforce the power that this vehicle is capable of. Subaru fans can look forward to the most powerful WRX STI that the brand has ever produced coming in the future. Namba makes no secret of that fact.

A hint of the power to come

He gives us a hint of the coming power as he talks about the new WRX Concept hood intake and the central bumper that are vital in representing the “sure-fire turbo performance” that is available. The WRX has always represented stability because of the low center of gravity, and the grille and headlights are now more lengthy and protracted, which reinforce the pulled-back design and implied stability.

The side of the new WRX Concept features flared front and rear wheel arches that have defined the WRX in the past are still visible, but with a new modern design from the Subaru design department. From the side, Namba points out the new 20-inch wheels that he say “take a pivotal role for hinting at how well the vehicle has been designed.” The large bright yellow brake calipers can be seen peaking through the multi-spoke wheels that also speak of peak performance.

Another new design feature will be a the smooth coupe styling will be bolstered with a carbon fiber roof. The overall profile hints at the speed and agility of this concept. We should look for a lighter and more agile WRX than in the past. The side outlet vents that are characteristics of the WRX have been included again, this time with a modern touch.

Everything points to more performance

The rear design of the new WRX Concept also speaks of “pure speed” with its sharp edge of the boot at the rear, which also gives it a sharper look. The wide profile of the tail lights exudes the concepts stability and low center of gravity. This is further enhanced by the lower diffuser beneath the rear bumper., with its aerodynamic performance and “pure functionality.”

Again we can see what the Subaru design department has in mind in the area of more performance with the four tailpipes that suggest the underlying power. The yellow rings around each exhaust tip match the wheel calipers and the front WRX grille badge. And to finish out the presentation the design chief speaks of the body color “WR Blue III”, that oozes pure performance.

The news is all good

We can clearly see that the future of performance is alive and well at Subaru. Tomohiko Ikeda said recently, “You know that Subaru is well known for its performance models and our passionate owners always want to know what we are thinking in the area. Today we will give you a message that Subaru will continue to be committed to performance products.”

The new WRX Concept that was unveiled at the New York International Auto Show tells us that Subaru is committed to rolling out more performance models than ever before. Subaru performance fans can look forward to a new turbocharged intercooled engine with more power, a lighter more agile WRX STI with carbon fiber body panels, and improved handling from a tuned chassis. We can also look for even more AWD grip and road hugging performance from the patented Subaru Symmetrical all-wheel-drive system that is being improved. If you are a fan of Subaru and performance, there is much to be excited about.

Watch the Subaru report about the new WRX Concept from the New York International Auto Show.