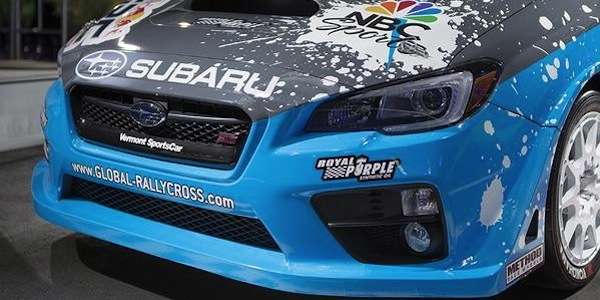 Subaru will again compete in the Red Bull Global Rallycross for 2015. Will fans see the new 2015 Subaru WRX STI?
Advertisement

Subaru has been secretive about the 2015 Red Bull Global Rallycross season as to whether they will unveil a new 2015 WRX STI GRC car. Subaru unveiled the 2015 WRX STI in full GRC trim back in April 2014 at the New York International Auto Show. For some reason, Subaru SRT USA chose to run the 2014 models all year and never brought out the new generation STI GRC.

Subaru announced they will run the new 2015 WRX STI in the Rally America Championship that will be piloted by David Higgins, but there’s no word on the GRC car as yet. The cars will again be prepared by Vermont SportsCar who since 2005 has had official support from Subaru of America. In 2006 together they created Subaru Rally Team USA. Vermont SportsCar handles all facets of the team, including the build of the team rally cars. The team rally cars are built nearly entirely in-house, including the shell prep, roll-cages, engines and many of the composite parts.

Last year SRT USA made significant progress in the GRC series with Bucky Lasek standing atop the GRC podium three times. He also added another X Games medal to his collection earning 2nd place at X Games Austin. The most notable accolade of 2014 came from the Viking Warrior, Sverre Isachsen, securing Subaru's first ever GRC victory in Seattle, and finishing fifth overall in the GRC championship.

Red Bull Global Rallycross is back in 2015 with a big season planned and the schedule has been announced. 2015 GRC will feature a 12-race schedule featuring marquee stops in nine different venues. The season kicks off on May 31 in Florida and ends again with a return to the bright lights of Las Vegas on November 5. There will be three doubleheader events, including the second straight doubleheader in the series’ home city of Los Angeles, and the expansion of the series’ popular Barbados race.

Red Bull Global Rallycross will be returning to NBC for the 2015 season, with 14.5 hours of original content, an increase of 4.5 hours from the 2014 season. Broadcast dates and times will be released at a later date.