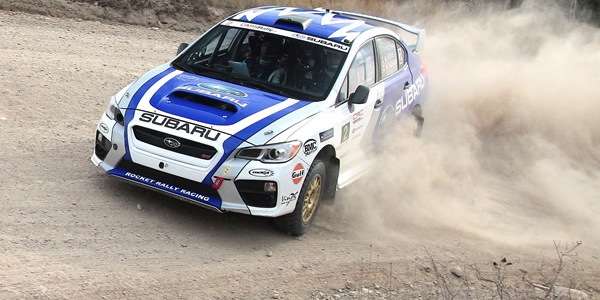 Subaru has announced Antoine L'Estage will be driving the new 2015 WRX STI this year in the CRC. He won’t be driving the Mitsubishi Lancer Evolution in 2015.
Advertisement

L'Estage became the first driver to win every CRC event in one year and captured the driver's championship last year, while co-driver Alan Ockwell, won the co-driver title for 2014. The extremely experienced pair will be behind the wheel of the all-new SRTC 2015 Subaru WRX STI with anticipation of being the quickest car, driver and team to ever compete in the CRC.

SRTC will continue to be managed in cooperation with Rocket Rally Racing and Patrick Richard, based out of Squamish, BC, for the 2015 season. The 2015 Subaru WRX STI rally car was developed from the ground up at Rocket Rally Racing’s facility using state of the art equipment and materials.

Antoine L'Estage and Patrick Richard are “chomping at the bit” to get started. "I'm delighted to be given such an opportunity," said L'Estage. "I cannot wait to start working with Subaru Rally Team Canada and Rocket Rally Racing." Richard said, "Between Antoine and myself, we have won 11 of the last 12 driver championships in Canada. With this strong car, driver and team combination for 2015 we have set ambitious goals for ourselves, we hope to be breaking stage records everywhere we go."

L'Estage and Ockwell, now piloting the 2015 Subaru WRX STI, will go after another manufacturer championship this season. The 2015 CRC season kicks off on February 6 at the Rallye Perce-Neige Maniwaki, in Maniwaki, QC, marking the 50th anniversary of the event. Stay tuned.