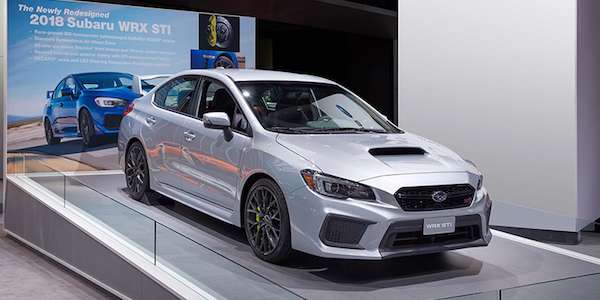 The newly-remodeled 2018 Subaru WRX STi made its global debut at the New York International Auto Show this week. Are the upgrades enough to keep STI fans grinning?
Advertisement

Subaru’s rally-bred WRX STI is designed to make performance fans grin when they get behind the wheel. From it’s 305hp turbocharged boxer engine, performance-tuned suspension, and big wing on the back, the STI is all about ramping up the fun-to-drive meter. It’s what sets the brand apart from other automakers. It’s more than a token performance vehicle in Subaru’s lineup. It’s the motorsport DNA that comes in every vehicle from the Outback to the Legacy sedan.

The 2018 WRX STI breaks cover in New York this week at the annual auto show without much fanfare. The new Ascent 3-Row SUV and new-generation Crosstrek crossover were in the spotlight this week on the Subaru stand in New York. Subaru does gets recognition for their performance models from Kelly Blue Book.

KBB just awarded Subaru the Best Performance Brand in America in their Brand Image awards for the third straight year. It’s because of the sport-tuned WRX, performance-tuned WRX STI and the rear-drive BRZ sports coupe. But it’s the STI sedan that nails it for Subaru. What about the 2018 variant?

The newly-redesigned 2018 Subaru WRX STI is enough for now

Subaru touts the newly-redesigned 2018 WRX STI performance sedan as the best-handling, best-performing example they’ve ever built. We would have to agree on paper. But are the upgrades enough for STI fans?

STI fans will never be satisfied until they get a new-generation 2.0-liter FA power plant with more power. They also want a hatchback body style with more versatility. Why doesn’t Subaru Corporation move faster in the development of the WRX STI? Just take a look at the new 3-Row SUV, and new-generation Crosstrek at the NYIAS this week. Subaru pored a ton of money and R&D into the two new vehicles. Subaru is still a small automaker with limited resources. If they could, they would.

The 2018 Subaru WRX/STI remains the best sports car value on the planet with the WRX starting at $26,695, and the STI with an MSRP of $35,195. Decades of motorsports experience have helped motorsports partner Subaru Tecnica International develop the performance-tuned WRX STI into a “legendary beast” for performance enthusiasts. It will have to be enough for now, but more changes are coming in the next two years. Stay tuned.