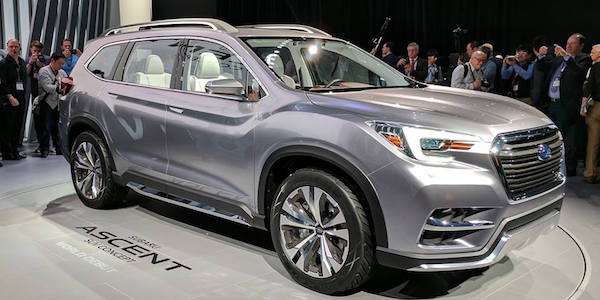 We announced here months ago that the new 2018 Subaru 3-Row Crossover would be called Ascent, so that’s not a surprise. Subaru uncovered the Ascent Concept at the New York International Auto Show to the media today. But Subaru of America revealed three other interesting details that shed more light on the new 7-passenger vehicle coming next year.

The new family-sized Ascent will be powered by an all-new turbocharged Direct Injection Boxer engine. This will be a new-generation Subaru boxer engine that will develop more power and be more fuel-efficient. What Subaru doesn’t tell us, is if it’s a four-cylinder turbo or a six cylinder turbocharged powerplant.

The fact that it’s turbocharged suggests it will likely be a four cylinder boxer for fuel-efficiency reasons. We reported earlier that Subaru would not use the 6-cylinder in the new 7-passenger SUV. Currently, Subaru does not turbocharge their 6-cylinder 3.6-liter boxer engine that powers the SUV-alternative Outback wagon. So the new model will get a completely new four-cylinder boxer engine from Subaru Corporation and not use an existing powerplant in their lineup.

The Ascent crossover will get the new Subaru Global Platform, but it will be a “modified” version compared to the Impreza and Crosstrek platforms. This is because the 3-row crossover is going to be considerably larger than the platform that underpins the new Impreza and 2018 Crosstrek. This special architecture will only be used on the new Ascent and not on any other Subaru vehicles. Ascent will be built in the U.S. plant in Lafayette, Indiana, and only sold in the North American market.

Subaru of America revealed the interior of the concept with a new flowing dashboard design and a 7-passenger configuration with center captain’s chairs. Subaru could offer a full second row bench as standard, and feature captains chairs as an option on the production model when it arrives next year.

The family-sized 2018 Subaru Ascent will have more interior passenger room and larger than any Subaru vehicle ever built. The cabin will also be more upscale and modern than any previous model. It will begin arriving in North American showrooms late next year. Stay tuned.