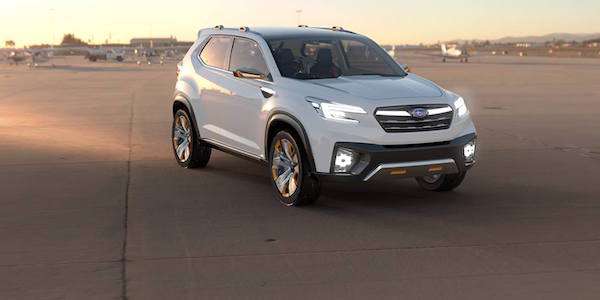 What will Subaru name their new 2018 3-Row crossover? How about Ascent 7?
Advertisement

Subaru will launch a new 3-Row crossover for U.S. buyers in 2018. What will the Japanese automaker call the new 7-seat SUV? Subaru of Indiana, Automotive (SIA) will be building the new Subaru 3-Row crossover in 2018 along with the new 2017 Subaru Impreza. Both will be built at the plant in Indiana, and both will ride on Subaru’s new Global Platform. What will Subaru call the new 7-passenger SUV?

It’s rumored to be called the Subaru Ascent 7. Four names have been filed by Subaru with the U.S. Patent and Trademark office recently. The four names are Ascent 7, Sojourn, Venterra and Cypress. Any of these could be the new name for Subaru’s 3-row crossover that will be built in Indiana starting in 2018. Do you like Ascent 7? Most buyers won’t care. They just want one.

For American buyers only

The new Subaru 3-Row crossover is replacing the retired Tribeca. It will only be available for buyers in North America. It will ride on Subaru’s new Global Platform. This will benefit 3-Row crossover buyers by keeping production costs down and will ultimately translate to keeping the purchase price down. The new architecture will also allow for a roomier interior without making the outside dimensions larger.

Subaru has high expectations that the new 7-seat SUV will be widely accepted like the Outback, Forester and Crosstrek. This will be the first new U.S. AWD vehicle from Subaru since they launched the Crosstrek crossover in 2012.

The Japanese automaker learned their lesson with the smaller Tribeca and won’t likely make the mistake again. The new seven-passenger SUV will be larger and designed for families with active lifestyles. It could resemble the new VIZIV Concept that Subaru unveiled at the Tokyo Motor Show pictured above.

The all-new Subaru 3-Row crossover will be a larger vehicle than the Tribeca, with full third-row capability. We know it will feature Subaru’s Symmetrical AWD and a boxer engine. It will also fit with the automaker’s recreation-focused branding. The new crossover won’t be sold in any other global markets and is designed only for American consumers. The new vehicle has not been named yet, but it could be called Ascent 7. Stay tuned.