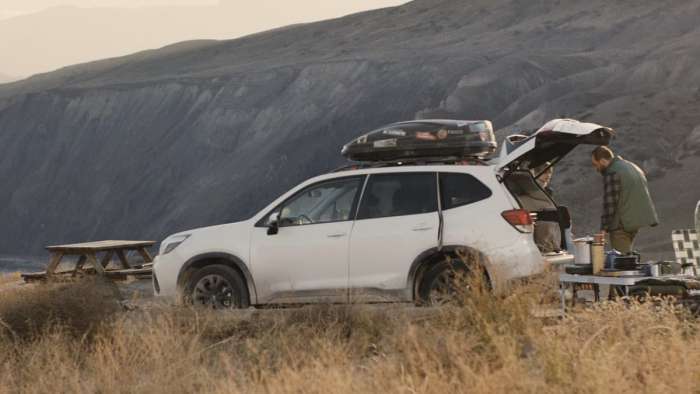 The new Subaru Forester is not ranked best in the compact SUV race unless you want an adventure.
Advertisement

Urban-adventurers who use their SUV for weekend get-aways, often don’t need a large full-size SUV. Subaru helped create the small SUV segment and now there is a boatload of vehicles in the crowded category for consumers to choose from. So which SUVs are best for you? According to Car and Driver, the crowded field of compact SUVs offers a wide range of utility for commuting and weekend excursions. They came up with sixteen small SUVs for evaluation.

If you take a look at the top 5 models, you can find a good compact SUV for your urban commuting needs. The Toyota RAV4, Subaru Forester, Volkswagen Tiguan, Honda CR-V, and Mazda CX-5 are within about a $1,000 of each other for the base model, and all are good choices for urban commuters. Where we see the biggest difference is in one area where the Subaru Forester comes out on top for adventure enthusiasts.

If you want an adventure

While the newly-redesigned 2019 Subaru Forester ranks behind the Volkswagen Tiguan, Honda CR-V, and Mazda CX-5, the new Subaru Forester does beat the rest of the field in two key areas for urban-adventurers. Even the base Forester ($24,295) comes standard with all-wheel-drive, while the other four compact SUVs offer it as an option. All Forester trims also come standard with X-Mode off-road hardware for extreme excursions to get you far away from civilization. Only the RAV4 offers a more expensive Adventure model ($32,900).

The new 2019 model also shines in its cargo-carrying ability. Because the fifth-generation Forester rides on the new Subaru Global Platform, the architecture increases total cargo space to 76.1 cubic ft. with the 60:40 split rear seatbacks lowered, a gain of 1.4 cubic ft. The load floor sits flatter, and the cargo area’s squared-off shape has been further optimized for ease of carrying large objects over last year’s model.

Another Forester improvement increased the maximum width for the rear gate opening to 51.2 inches wide, a 5.3-inch increase over the outgoing model, and the new 2019 Subaru Forester is up to 8-inch wider than on some competitive SUVs. For ease of cargo loading, Forester also gets a revised power tailgate that operates in 5 seconds, almost half the time of the previous model. The optional power rear liftgate also comes with auto close and height memory function.

We’ve driven the top five models and would recommend any of them for consumers looking for the best compact SUV. The new 2019 Subaru Forester is our pick for those looking to get away from civilization on the weekends.

You May Also Like: Compare New Subaru Forester With Competition’s MPG And Cargo Room

Denis Flierl wrote on May 24, 2019 - 1:17pm Permalink
We just wish Subaru hadn't dropped the Forester 2.0XT turbo model!
Digitaldoc wrote on May 24, 2019 - 4:11pm Permalink
For sure. Guess Subaru wants you to have an adventure slowly. Sales of the Forester are lackluster, so perhaps will consider bringing it back.
Mike Barker wrote on June 3, 2019 - 12:37am Permalink
I believe that the standard Forester does not come with x-drive. You have to buy Premium or above to get it.