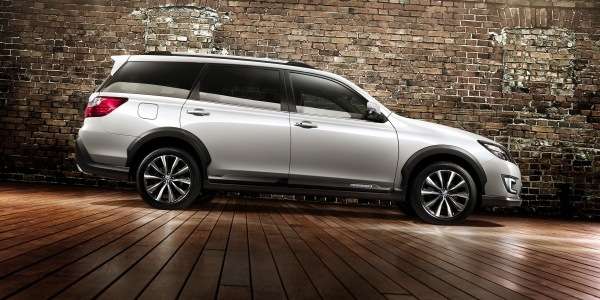 New Subaru Exiga Crossover 7 won’t be coming to the U.S.

The new Subaru Exiga Crossover 7 has been unveiled in Japan. Will this be a forerunner of the U.S. market Subaru 7-seater SUV?
Advertisement

The new Subaru Exiga Crossover 7 that was just unveiled in Japan is not coming to the U.S. market, but it could give us an idea of what Subaru has planned. Subaru will be building a new 7-seat SUV for the North American market and the Japan market Exiga Crossover 7 may be an example of what Americans can expect. With the success of the new 2015 Subaru Outback, the conservative Japanese automaker may be leaning towards a design that looks more like the highly successful 2015 Outback.

Will new U.S. market 7-seater look like the Outback?

The U.S. market 7-seater will be built at the plant in Indiana when Subaru expands production capacity. What Subaru is deciding on now, is what the new SUV will look like. It won’t likely look like the Exiga that made it launch in Japan last year, but it could resemble the newly released Exiga Crossover 7 that looks more like the Outback.

Subaru is being tight-lipped about the future project, but Masayuki Uchida, the Senior Product General Manager of Liberty (Legacy in the U.S.) and Outback products in Australia, told Motoring recently that the Tribeca's replacement could be based on a modified version of the platform used by the Liberty and Outback.

The new Subaru Exiga Crossover 7 will be for the Japan market only, but it gets design cues from the popular Outback that could make it to the U.S. version. Exiga Crossover 7 gets black plastic cladding around its lower panel edges and wheel arches, front and rear metal scuff plates, and black and silver roof rails, along with revised suspension that gives it 170mm of ground clearance (20mm higher than the standard Exiga). It’s powered by a 2.5-liter boxer engine and comes standard with the latest version of Subaru’s EyeSight advanced driver assistance system.

Subaru learned from the mistakes they made with the Tribeca that strayed from Subaru’s core values of recreation, sporty driving dynamics and performance. The U.S. market will need a 7-seater that fits these core values, and if it does, it will likely be a success like the Outback. Exiga Crossover 7 gets other unique design elements that include an enlarged grille with horizontal chrome slats, C-shaped LED daytime running lights, 17-inch alloy wheels, and a tailgate spoiler.

This new design would fit the recreation-purposed design that is driving the brands success in the U.S. Subaru is popular with a generation with active lifestyles and the new model fits the Subaru mold. Will the new U.S. market 7-seat SUV look like the newly launched Exiga Crossover 7? Stay tuned.