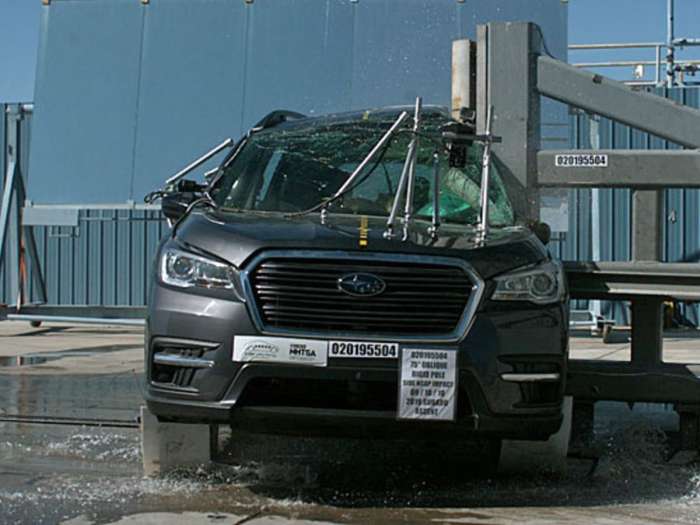 The 2019 Subaru Ascent gets rated by the NHTSA. See why it gets more top safety ratings.
Advertisement

The new 2019 Subaru Ascent is the brand’s flagship model and Subaru needed it to be safe for families. They succeeded by building their largest vehicle ever made by achieving the top safety ratings in the industry. It was recently rated a Top Safety Pick+ (TSP+) designation from IIHS in September. Now the family hauler gets a Five Star Safety rating from the National Highway Traffic Safety Administration (NHTSA). The tests were conducted at their Vehicle Research and Test Center in Washington, D.C.

The NHTSA put the new Subaru Ascent 3-Row through three tests: front, side and rollover crash tests. The newest Subaru scored five stars in both the front and side crash tests, and four stars in rollover testing. The NHTSA considers three safety features as part of the ratings: forward collision warning, lane departure warning and crash imminent braking. The Ascent comes standard with all three safety systems, and the family hauler also includes dynamic brake support as standard, a feature that supplements driver-applied braking force as part of its crash avoidance system.

The new Ascent family hauler is Subaru’s sixth vehicle in the lineup to earn a five-star rating from NHTSA. The 2019 Subaru Outback, Forester, Crosstrek, Legacy, and Impreza; The 2019 Subaru WRX and BRZ have not yet been rated. Competitors like the Toyota Highlander, Volkswagen Atlas, Honda Pilot, and Kia Sorento, are also rated at five stars overall.