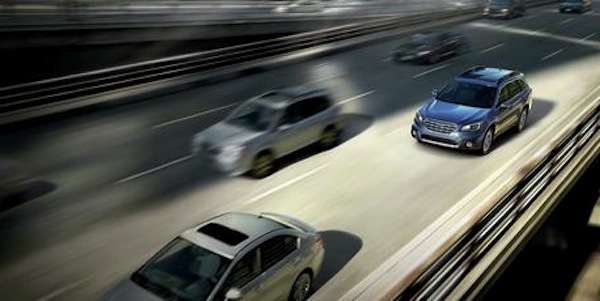 The new 2015 Subaru Outback achieves a five star rating in the NHTSA safety tests. Why did it get a better rating than the 2015 Forester?
Advertisement

The 2015 Forester SUV, XV Crosstrek crossover, BRZ sports coupe and Impreza compact have also earned the top five star safety rating overall from NHTSA, but the new Outback wagon tops its stablemates in one area. The other Subarus received a four out of five rating in the front crash test, while the 2015 Outback earned a five star rating. The 2015 Legacy sedan and 2015 Subaru WRX/STI have not been rated yet by NHTSA.

MUST SEE: 3 new technologies that make 2015 Subarus even safer

The new Outback comes standard with many safety features that includes a rearview camera and a new rollover sensor that can deploy the side-curtain airbags if an imminent rollover is detected. It also gets new front seat-cushion airbags help to keep occupants in place in the event of a frontal crash. The new Subaru rear vehicle detection system, that is standard on the 2015 Limited Outback and optional for the 2.5i Premium model, bundles blind-spot detection, lane-change assist and rear cross-traffic alert.

The new 2015 Subaru Outback just earned the highest five star rating in the NHTSA safety tests. Consumers looking for a safe multi-purpose wagon should look at the Outback. All Subarus achieve the top safety ratings in the industry, but the new Outback tops its stablemates in front crash avoidance testing.