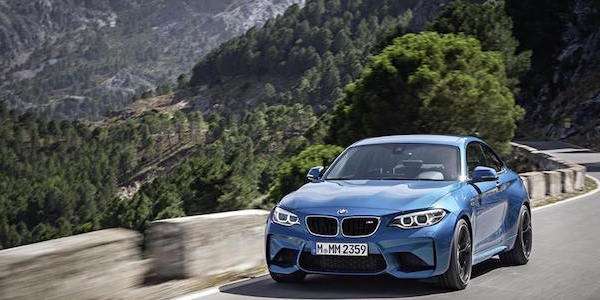 BMW in Australia has announced pricing on the new 2016 M2 Coupe. The new M2 will be offered in two variants.
Advertisement

The first global pricing on the new 2016 BMW M2 has been released and it comers from BMW Group Australia. BMW will offer two variants, a six-speed manual gearbox called M2 Pure for $89,000 Australian and the top of the line M2 DCT automatic starting at $98,900.

The new M2 comes with a TwinPower 3.0-liter turbo 6-cylinder inline engine that pumps out an impressive 370hp and 343 lb-ft of torque. It will launch from 0-62 in just 4.3 seconds with the DCT automatic. The M2 clocked a 7:58 around the Nurburgring, which is just six seconds slower than the M4’s official 7:52. The M2 will blow the lid off the fun-to drive meter when it arrives in Australia and around the globe next year.

The M2 is being produced at BMW’s plant in Leipzig and the first models are already rolling off the assembly line. The new M2 Coupe is produced for the global market at Leipzig and the only production site for the new high performance car. The M2 replaces the BMW 1 Series M Coupe, which was also built in Leipzig from 2011 through 2012.

The M models are top sellers in Australia and the all-new 2016 BMW M2 should also be a big hit down under with performance enthusiasts. Look for the M2 Pure and M2 DCT to hit BMW showrooms in the second quarter 2016.