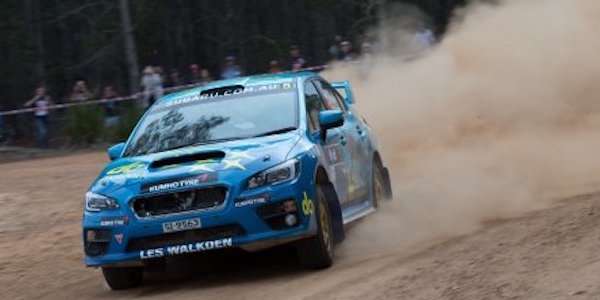 In the debut of the Subaru do Motorsport 2016 WRX STI, Molly Taylor just misses the podium in Australia. How far off the pace were they?
Advertisement

There’s always a learning curve when you are in a new rally car with a new co-driver. It proved to be a big learning curve for Molly Taylor and co-driver Bill Hayes in the new 2016 Subaru WRX STI. Molly proved to be consistent in her performance with two fourth place finishes for heat one and two on Friday and Saturday at Quit Forest Rally in Western Australia. The competition was close as they finished just 33.3 seconds off the pace of a third place podium finish.

Molly was consistent all weekend with a fourth place on the 17.85 km SS15 which was the team’s best of the day on Saturday. It lifted the team to fourth overall where the duo remained for the final two stages.

Evans and Searcy won first place in a Subaru Impreza WRX STI, Bates and McCarthy took second place in the Toyota Corolla S2000 and Dowel and Feaver in a Hyundai i20 rounded out the podium just ahead of Molly Taylor and Bill Hayes.

Not making the podium was disappointing, but the team was happy with this being their first time on the rally stages in the new STI. Subaru Australia Managing Director, Nick Senior, said: “It’s been a fantastic first time out for the team and we’re very happy with the production WRX STI.

The “preparation makes perfect” approach of the team, managed by the respected Les Walkden Rallying operation helped them get a top four finish. “All credit to Molly and Bill, they’ve certainly raised a few eyebrows with their abilities this weekend. Les Walkden Rallying has also done an amazing job preparing the car. We’re really looking forward to the next rally.” Senior said after the race.

A new livery for the WRX STI

Round Two is just a month away. The Subaru do Motorsport team will take what they learned and will be ready for the National Capital Rally, ACT, on May 27-29. Dropping two seconds from each stage will put them on the podium next month. The 2016 Subaru do Motorsport WRX STI will be getting a new livery to reflect Australia’s capital city culture in Canberra. Stay tuned.

Toyota's First EV Will Have a Name of BZ: Toyota BZ
First Videos From Inside The Boring Company's Las Vegas Loop
END_OF_DOCUMENT_TOKEN_TO_BE_REPLACED