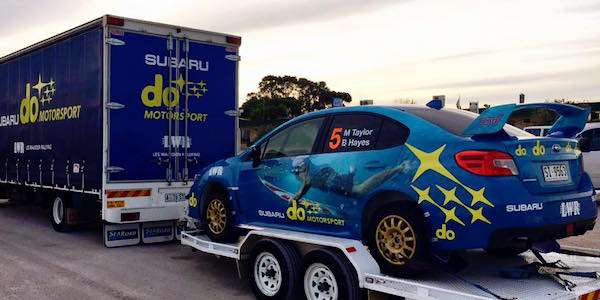 Why is Subaru do Motorsport changing the livery on the new 2016 WRX STI rally car for every race?
Advertisement

Get a good look at Molly Taylor’s 2016 Subaru WRX STI rally car because it will be changing with each new round of the Australian rally. The new WRX STI will be a chameleon car and get another livery after the rally race this weekend. Why are they changing it for every race? There’s five rounds and the STI driven by Molly will get a new livery to reflect the regions key lifestyle or recreational activities held in that area.

The surfer theme won’t be around for long

Subaru do Motorsport is ready to run the stages at Quit Forest Rally in Busselton, Western Australia this weekend. The WRX STI’s livery for this even will be the “surfer” theme seen on the promotional car initially used to highlight Subaru’s re-entry to the sport. It won’t be sticking around for long.

Subaru Australia Managing Director, Nick Senior, said, “For this event we’ve used the surfing theme, obviously a tie-in with the world-class breaks that the Margaret River is renowned for.” Les Walkden Rallying changes the color scheme for each race by using a special “wrap” around the WRX STI’s panels, applied in the team’s headquarters, outside Launceston, in Tasmania.

The WRX STI is ready for Quit Forest Rally

The new 2016 Subaru do WRX STI has undergone testing on the challenging WA dirt and Molly and co-driver Bill Hayes report further progress. Molly says, ”We’ve managed a few more hours and while the surfaces here are completely different to Northern Tasmania, we’ve learned a lot and our previous experience rallying in WA is also a bonus.”

Quit Forest Rally in Australia gets underway Friday evening with two short Super Special Stage bursts in Busselton, before the transit to Nannup Service, followed by eight more heat one stages on Saturday and nine heat two stages on Sunday. Get a good look at the 2016 Subaru do Motorsport’s WRX STI livery. It will be changing like a chameleon for the next event. Stay tuned