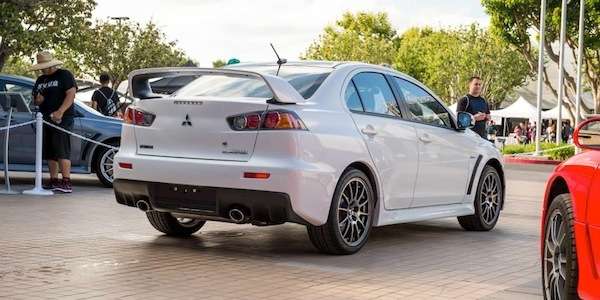 Mitsubishi took the opportunity at MOD2015 to reveal the U.S. spec 2015 Mitsubishi Lancer Evolution Final Edition model. How much hp will it have?
Advertisement

Thousands of proud Mitsubishi owners traveled near and far this past weekend in celebration of the brand at the North American headquarters in Cypress, CA for MOD2015. Many of those owners were Lancer Evolution fans and they were teased by Mitsubishi with the reveal of a White pre-production 2015 Lancer Evolution Final Edition model #US0000.

Mitsubishi chose the large gathering to unveil the Final Edition #US0000 model, and it will signal the last EVO that will ever be produced by the Japanese automaker. The company has chosen to discontinue the performance model after the final model rolls off the assembly line later this year. This limited edition model will commemorate the end of an era.

According to reports from Left Lane News, Mitsubishi announced at the event a few details about the U.S. spec Final Edition that will arrive in North America later this year. A company spokesperson said, there will be a "slight bump" in horsepower in the Final Edition, but the actual number was not officially announced.

Like the Japanese spec Lancer Evolution Final Edition, the U.S. model will get sodium-filled exhaust valves, which Mitsubishi says will improve output at medium and high speed range. Other upgrades will be made to the suspension with Bilstein shocks, Eibach springs and Brembo two-piece ventilated front brakes discs. The color coordinated 18-inch BBS wheels will be wrapped in high-performance Yokohama Advan tires. The Final Edition models are based on the GSR trim and will come with a five-speed manual gearbox.

Inside, the Final Edition black, silver and red emblem with the production number on it will be affixed right in front of the gear shifter. It will also get Recaro bucket seats with a special red-stitching on the steering wheel, shift knob, parking brake handle and console lid that will all be covered in leather.

Outside, Final Edition will come with a special dark chrome front grille with a gloss black bumper bar and hood vent surrounds. The roof panel will be offered in two colors, white or black, which can be matched with one of five body colors; red, white, gray, black and blue. Also on the outside, a "Final Edition" badge will be mounted on the trunk lid, and the same logo will be shown on the multifunction display upon startup.

In Japan, they are only selling 1000 Final Editions and production will begin next month. The U.S. will get 1600 limited edition 2015 Mitsubishi Lancer Evolution Final Edition models later this year. Pricing has not been announced. Stay tuned.

Toyota's First EV Will Have a Name of BZ: Toyota BZ
First Videos From Inside The Boring Company's Las Vegas Loop
END_OF_DOCUMENT_TOKEN_TO_BE_REPLACED