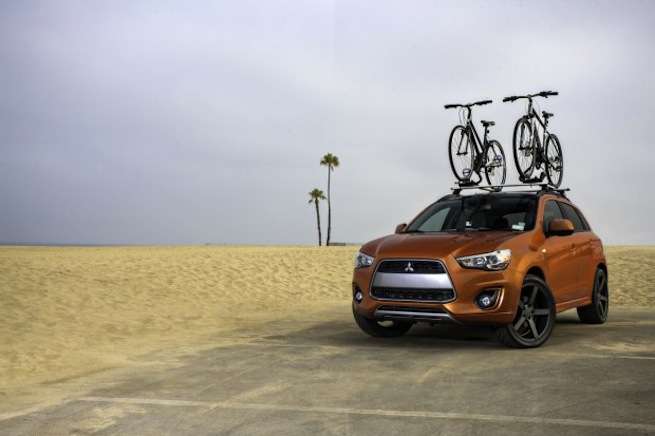 Mitsubishi and the H360 Group have teamed up to create a pair of custom 2014 Outlander sport-utility vehicles designed for today's active professionals.
Advertisement

The two Outlanders were customized by Mitsubishi Motors and the H360 Group to be examples of what today’s active professionals are looking for in an SUV. Each new model was customized to become the “ideal ride for a particular season.”

They each come complete with integrated sports equipment and cutting-edge technology designed to offer as much active fun on the beach and on the slopes as possible. While the two custom Outlander Sports look good, they won’t be making it production according to Mitsubishi. That’s too bad because buyers are looking for vehicles that will set them apart from the crowd. And these custom creations are also functional.

The 2013 Outlander Sport Summer Edition comes with his-and-hers roof-mounted Trek mountain bikes, along with a tennis racket, jump rope, various kettlebell workout weights and resistance bands, yoga mats, and exercise wear housed in custom-made storage sections in the rear cargo area. A wakeboard vest and ski rope can be found in a new waterproof compartment in the rear cargo floor. It also features an HD camera with wi-fi remote to document whatever adventures the driver and passengers embark upon, along with an extensive exercise workout program on a USB drive plugged into the front console.

The 2014 Outlander Winter Edition features his-and-hers roof-mounted snowboards, matching jackets, gloves and snow pants, along with his-and-hers goggles and snowboarding boots. Outlander Winter Edition comes with a mini coffee maker in the rear cargo area and an LED-illuminated Thermos mounted in the SUV's center console. To document those extreme moves on the slopes, an iPhone 5 camera lens has been placed in the armrest and an HD camera is located on the dashboard. There's also a custom Recaro children's booster seat in back, for families with small children.