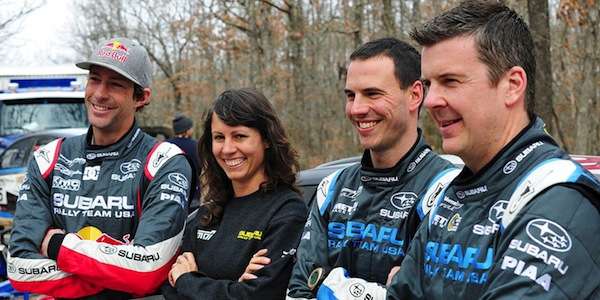 If you think racing the super fast 2015 Subaru WRX STI on dirt, tree-lined courses at break-neck speeds is just for men, don’t tell Chrissie Beavis. She is the new co-driver for Travis Pastrana who drives the 2015 WRX STI for the Subaru Rally America team. They just completed their first race at Rally in the 100 Acre Wood in Missouri. The WRX STI finished in second place in Pastrana and Beavis’s first race together as a team.

How did she get picked to be the co-driver with Pastrana? Chrissie Beavis was born into Subaru Rally Racing. Her parents founded the California Rally Series in the 70’s and competed in open class Subaru’s in the 90’s. Early on, Chrissie fell in love with Rally racing and followed in her mother’s footsteps and became one of the top co-drivers in the United States.

It takes a special person to be able to guide a driver averaging 70-80 mph on a race course filled with turns, jumps and bridges that can end in disaster if there is one wrong turn. Chrissie has guided many top drivers such as Tanner Foust, Ramana Lagemann, Rhys Millen, and now Travis Pastrana. She has many wins as a co-driver. Her co-driving career is highlighted with wins at X Games Gold and Silver (2007, 2008), an overall win at the 2005 Pikes Peak International Hill Climb, and the 2006 USRC National Co-drivers Championship.

And her skills go beyond reading pace notes for Rally drivers. Chrissie campaigned her own rally car in the California Rally Series landing several class wins and overall podium finishes. And she even knows how to wrench. You may see Chrissie working on the 2015 Subaru WRX STI if they need any emergency roadside repairs this season.

Chrissie is also an accomplished architect. She owns an architectural design and fabrication firm in San Diego, California. She has a degree in Architecture and uses her experience to focus on sustainability by using environmentally conscious design and construction techniques.

Being a co-driver for Travis Pastrana in the 2015 Subaru WRX STI is no easy task and requires skills and talent. It also requires a lot of courage and trust. Watch Travis Pastrana and co-driver Chrissie Beavis race at high speeds and take jumps on Stage 13 "Camelback" at Missouri's 2014 Rally in the 100 Acre Wood.