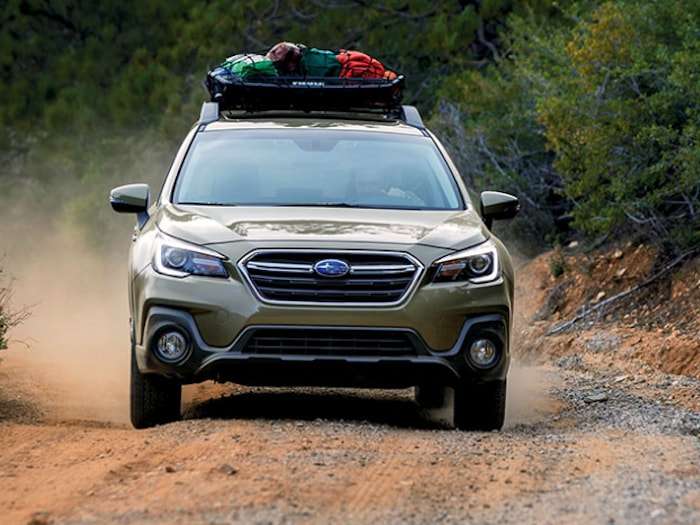 If you want a 3.6R Outback or Legacy model, you better get one now. Check out what Subaru has planned for their next-generation Outback.
Advertisement

The 2018 Subaru Outback 3.6R packs a 6-cylinder boxer engine, but you may not be able to get it for much longer. One look at the all-new 2019 Subaru Ascent tells us the 3.6R in the Outback and Legacy could be like the NFL, (Not For Long).

Why is the 3.6-liter engine in Outback and Legacy going away? It’s because of the tighter fuel-mileage and emissions regulations around the globe. Automakers need to downsize engines and make them cleaner burning for the new California and European regs. But it’s not such a bad things for consumers.

Subaru says, despite the Ascent 2.4-liter’s smaller displacement, the newly developed four-cylinder turbocharged direct-injection boxer engine will achieve smooth acceleration equal to or better than that of competing vehicles with 3.5-liter 6-cylinder engines. That is accomplished by adding torque over horsepower, because torque is what gets a vehicle moving from a stop and helps in pulling the vehicle up a hill, or when towing.

Take a look at a few examples in the story below and you’ll see why its a good thing for new-generation Outback and Legacy buyers when they arrive with a new turbo four cylinder engine.

Subaru is correct when they say the all-new Ascent 3-Row will achieve smooth acceleration because of torque, equal to or better than that of competing vehicles with 3.5-liter V6 engines. The new 2.4-liter twin-scroll turbocharged four-cylinder boxer engine has more torque than any of the competition’s larger 3.5-liter or 3.6-liter V6 engines, and it should get improved fuel-economy over the competitor’s V6 powerplants.

The all-new Ascent 3-Row, is powered by the brand’s all-new direct-injected turbocharged 2.4-liter Boxer 4-cylinder that beats the current Outback 3.6R engine. The 3.6R develops 256 horsepower and 247 lb. ft of torque. Both short of Ascent’s 260hp and 277 lb. ft of torque.

The 3.6R’s demise is no surprise, because Subaru Corporation spelled it out in their “Prominence 2020" plan. The plan outlines every Subaru boxer engine will come with the latest Direct Injection technology. You’ll see smaller turbo engines developing more power and with greater fuel efficiency in the new-generation Subaru vehicles.

The 3.6 Liter 6-cylinder Boxer engine in the Outback and Legacy is going away soon. The new-generation models, when they arrive sometime in 2019, will likely be powered by new twin-scroll turbocharged four-cylinder boxer engines like the new 2019 Ascent. So if you still want the larger displacement 3.6R 2018 Outback and Legacy model, you better get one soon, before they are a thing of the past.